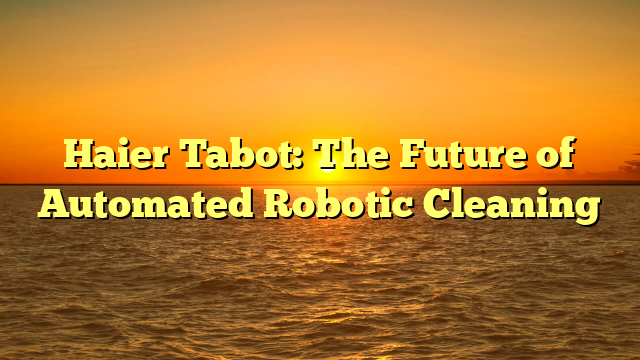 Today, we’re going to speak about an exciting smart cleaning device called Haier Tabot and I’m sure it will be appealing for some of you. It’s no wonder we’re living in a crazy tech world and we have all marveled at the cleaning droids that were in Star Trek; floating effortlessly across a room, leaving not a speck of dirt behind.

Similarly, many technology enthusiasts have been amazed by the development that is taking place in the robotic vacuum cleaning industry in the past few years. These ‘Roombas’ and ‘RoboRocks’ have the ability to free up a room from dust without any human effort at all.

Yet, Tabot, a sub-brand of the famous Haier company, has come up with an innovation that is on route to ‘spice’ up the industry and make our lives even easier. Their original goal was to raise $5000. This goal was obliterated (to put it punctually) with massive funding of more than $400,000. They are currently in the production phase of their prototype.

Haier Tabot claims that it has “better performance than 99% of Robot Vacuum on the market”. It comes with two features, mopping and vacuum. The vacuum robot is perfect for everyone who wants a cleaner room; however, it’s focus audience is on individuals that have a lot of hair (from dogs, clothes, heads, etc.) on the floor.

It comes with a built-in ‘Anti-Winding Blade Roller Brush’ which will cut all long hairs before being sucked into the dust compartment. When combined with the powerful 3200PA Ultra-Strong Suction, which can “easily pick up metal balls”, the robotic vacuum and mop seem like a perfect powerhouse to cleanse your home.

Vacuuming is not enough to remove all the germs, bacteria and dust from a room. Therefore, Hairer Tabot’s robotic cleaner also comes with an inbuilt mop functionality. It has 230ml of water in its tank, which is sufficient to clean up large rooms. The company claims to have installed 3 different types of safeguards’ mechanisms to prevent any leakage from occurring.

The robotic cleaner moves in a Y-shaped pattern which emulates real-life cleaning and “makes your room super clean”.

It features a Laser Scanning Technology (LDS) that is also put in many Unmanned Ariel Vehicles (UAV) such as the drones used by the military in various countries. It works by making a Two-Dimensional analysis of the room and creates a map of the owner house’s layout.

Once the house map is ready, it will appear on the Haier Tabot Companion app on your phone. You can then modify the map to make ‘no-go zones’ if required.

Further calculations are done through Simultaneous Localization and Mapping Technology (SLAM) creating the shortest path for effectively and quickly cleaning a room.

The robot also has fantastic smart functions such as its ability to glide under sofas and climb over small obstacles. Its best feature is a cliff sensor that prevents it from falling off your stairs or roof. When the robot feels low on battery, it can return to simply return to it’s self-charging port.

Is this the future?

Some people believe cleaning to be like gardening, a calming task that cleanses the mind. They claim that automating this will remove the calming effect.

Yet, the above are a minority. The statistics all point towards one direction – we are walking towards a world run by automation.

People will buy robotic vacuums such as that of Haier Tabot. The vacuum robot is a testimony to technological progress and an allusion for a future where technology will thrive. If you are interested to buy one, there is a crowdfunding campaign on IndieGoGo website and the Haier Tabot robot starts from $469 USD.

The post Haier Tabot: The Future of Automated Robotic Cleaning appeared first on It’s a Gadget.