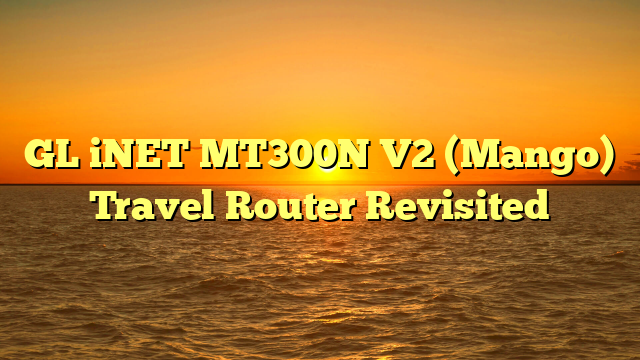 Well, I never thought I’d be writing more about this router, but in the last couple of years I’ve become a firm fan of OpenWrt because of it’s ability to be administrated from the web interface LUCI or the command line. In particular I’ve been making great use of GL-iNet routers as you’ll see elsewhere – because on top of OpenWrt they also have their own fancy, graphical and consistent interface.

This particular Mango router has it’s limits – like not enough room to fit various utilities due to lack of storage and so it has been sitting gathering dust in a drawer for some time – until today.

My WiFi coverage at home only just gets out to our Pergola and I pondered firstly sending out two Ethernet cables to my cameras out there (which would not have helped my ESP8266-based WiFi pergola light controllers) then in a moment of inspiration decided to go buy a WiFi access point to run off a single Ethernet lead… then I remembered the Mango – (MT300N V2). I pulled it out and sure enough, still working perfectly – 2.4Ghz WiFi only – but then, the cameras are happy with 2.4Ghz WiFI and the ESP8266s will use nothing else.

By now I figured the firmware would be very old. I went into the GL-iNET graphical interface, looking for OTA updates – sure enough, this ancient travel router was updated late last year. A minute or so later, I had the update running. Incidentally this is a tiny, sub-30 Euros job still available (for example) from Amazon.

I invite interested readers to take a look here – the GL-iNet site is FULL of useful info on their routers and the page above is all about the Mango. I’ve now moved on from having to rely on a router for VPN but for reliably extending my network to outside, I think this will do the job based on GL-iNET experience in general but remember this is an older model, simple travel router so don’t expect to be able to add much. I ran out of room trying to add utilities to partition and format an SD so that I could expand storage. As I speak however, it is now functioning outside as an access point.

Back in 2018, I bought this low-cost Mini-router (Mango) without having a clear idea of how to use it, other than to somehow try to get past the RIDICULOUS GEO-restrictions that providers such as the BBC and others put on their TV content. My MT300N (Mango) is yellow incidentally, like the photo. After very carefully reading the instructions and comparing to other routers, I realised what a winner it really is.

But first, the point. I was in Spain when I originally wrote this article in 2018 and on the one hand I could see why the BBC may not wish the Spanish or any other Europeans who don’t pay the BBC tax we call a license, to watch UK content, on the other hand I was and am a UK license paying citizen with the necessary username and password to use the iPlayer. Why then do, for example, the BBC attempt to prevent me from using the service I pay for when I’m in Spain? They should offer instant refunds to those who cannot access the content plus extra for the inconvenience.

As it happens, NowTV and Amazon have the same ridiculous restrictions, despite protecting their content behind username and password systems. For far too long these powerful organisations have had it their way and to hell with convenience for the paying customers.

Even the Roku 2 Box has no VPN capability (I didn’t know that when I bought it) though my little Android TV boxes (that’s full Android boxes used for TV, not the awfully crippled “Android TV” type) do. Traditional Android options make Android box VPN very inconvenient for this purpose as you have to use PIN protection when using VPNs (not much fun with only a mouse), however by putting the VPN into the router and using that to feed a traditional 5-output TP-link router which ONLY feeds these two boxes, I hoped to forget about the hassle while NOT slowing down the rest of my network.The unit seemed to work sometimes showing the VPN IP range, other times reverts to it’s 192.168.8.x internal range. I didn’t at the time know why it was doing this. At best I managed 2 days solid connection to the UK VPN, then lost it. There was nothing wrong with the VPN as I could put it on the Android box if need be but that did not help the other boxes. Ultimately I used PiVPN on a UK-based Raspberry Pi to give me UK access, putting a client for PiVPN onto the Android box in Spain.

Finally we have Netflix. That in my case originally needed the Roku box as Netflix won’t stream to a TV from Android for reasons beyond me. As it happens there are shows on the Spanish version that do not appear on the UK version but I figured I’d happily lose that for the convenience of always-on VPN for the TV.

Remember I’m not suggesting here that anyone attempts to use what you see here to get free TV and movies. As someone who pays for all of these services I object HIGHLY to being told I can’t use them when away from home –especially as a somewhat unwilling BBC license payer.

There was a time when a simple trick with DNS got around these restrictions, not any more. Nor do block-purchased, shared VPNs work well any more, especially on Netflix and the last thing I want is my entire network slowed down with a VPN.

Combining my little sub-£20 Mango router (sitting inside my network here in Spain) with a streaming, dedicated VPN I felt I would be able to, without inconvenience, watch all of these services just as I would in the UK – but as noted above, not reliably. Ultimately I set up a VPN server of my own in the UK after putting in a new Vodafone Fibre high speed always-on solution over there. I found the best solution in the end was to use a Raspberry Pi which was already doing house control, together with PiVPN to access the UK from spain.

For those who panic about power use, none of this stuff uses more than a few watts. I use wired connectivity wherever possible and the Mango also has wireless facilities. The router was in 2018 $18 from Amazon.com,  £17 from AliExpress and  £20+ from Amazon.co.uk.

You may be interested to know that CBS have brought back Patrick Steward as Jean Luc Picard in a (relatively)  new Star Trek series.

Also in case you have been living in a cave, Amazon produced a 3rd series of Man in the High Castle which came out in Autumn 2018 and appeared on Amazon Prime.

I wonder how long it will be before USA-based services get taxed to death in Europe in retaliation for the somewhat childish taxes Trump imposed on foreign imports – but that’s a whole other conversation and this is a technology blog.

Meanwhile, although ultimately the Mango router (V2) was not needed in Spain,  I found it useful back in the UK to simulate the Spanish network – using the latest OpenWrt updates avalable on the web. Works a treat and of course a replica of my Spanish Raspberry Pi working on the Mango and using my UK broadband as WAN, provides access to this “virtual” Spanish setup without actually interfering with the real setup before I get back there.

August 2021 – I have just fully updated the mango router which is still working fine – for reasons beyond me I put the full OpenWrt on it which means I can’t get the GUI up but I have the current OpenWrt running on it. If anyone knows how to (easily) restore the GL-iNET version of OpenWrt to this device, I’d love to hear from you.

See my more modern blog entries on other GL-iNET routers I’ve used (and in some cases am currently using in August 2021).