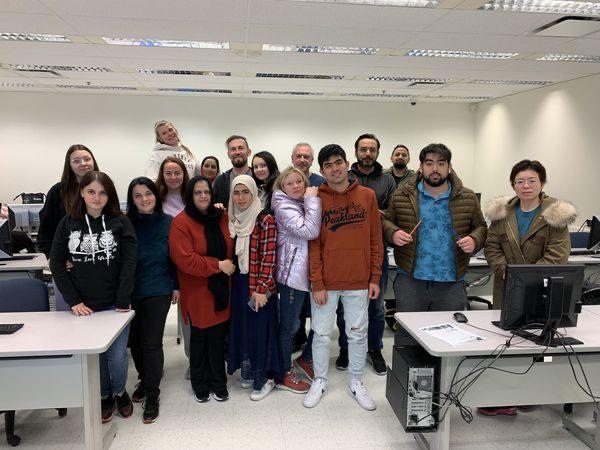 Some Afghan and Ukrainian newcomers to Canada say that although they are struggling with different challenges in their new country, they now feel safe and live in peace.

Since August of 2021, more than 26,000 Afghans have relocated to Canada since the Taliban seized control of Afghanistan. The Canadian government maintains it will fulfill its commitment to bring at least 40,000 Afghan refugees into the country by the end of 2023.

The number of refugees coming from Ukraine to escape the war against Russia in past nine months has been much higher. According to government data, since February, more than 128,000 Ukrainians have relocated to Canada.

Several Afghan and Ukrainian refugees shared their personal experiences of moving to Canada and adapting to life in a new country with CTVNews.ca.

“I never thought I would come to Canada one day and leave my country,” Maryam Khurami, an Afghan mother who fled Afghanistan after the Taliban takeover in August 2021, told CTVNews.ca.

Once a well-known TV presenter in Afghanistan, she arrived in Canada in May, along with her son and husband, knowing no one here.

“I was feeling extremely alone for weeks and even months before I got to know the environment and make friends,” she said, recalling her earliest memories after landing in Canada.

Many newcomers experience some degree of challenge and culture shock during their first few months in Canada. For Abdullo Sheralizoda, a 24-year-old Ukrainian refugee, learning English has been a big challenge, but dealing with the uncertainty of being a temporary resident is an even bigger one.

The Canada-Ukraine authorization for emergency travel program allows Ukrainian nationals fleeing the war with Russia to stay here up to three years. Sheralizoda expressed a desire to remain in Canada.

Along with his mother and five siblings, he fled their home in Ukraine once the war broke out in February. Now, he takes care of the family and oversees everything since his father is not with them.

“My father stayed in Ukraine, as most men of fighting age were not allowed to leave Ukraine, and put a big responsibility on my shoulders,” Sheralizoda told CTVNews.ca.

After settling in Regina, he enrolled all of his siblings into English classes as they try to adapt to a new society with cultural, linguistic and religious differences.

“It has been very hard for me to interact with people and find a good job here without being able to speak English,” he said.

Although Sheralizoda and his family have gone through a difficult time, they’re happy at least they are safe now and they are preparing to celebrate Christmas.

Abdullo Sheralizoda (second from right) poses for a photo during English class. (Supplied)

But Christmas is a completely new phenomenon for Farhad Stanikzai and his children as an Afghan and Muslim family. When asked for his thoughts on Christmas, the answer was unexpected.

“I have no idea,” he told CTVNews.ca.

But Farhad’s 12-year-old son, Abdul Baset, has heard a bit about Christmas from his new friends he made in Regina a month after arriving.

“I see lights and Christmas trees everywhere and it reminds me of Nowruz (Persian New Year),” Baset said while gazing at a Christmas decoration hanging from a coffee shop window.

Baset, his sister and two brothers are waiting to be enrolled into school as they have been away from the classroom for more than one year.

Back in Afghanistan, Farhad was an army officer and says he worked with Canadian soldiers for more than five years. He was part of an operation group in Helmand and Nangarhar provinces helping international forces.

When Kabul fell to the Taliban, Farhad desperately searched for a way to leave Afghanistan. He escaped to Pakistan, and after staying there more than four months, he finally came to Canada a month ago.

“I found Canada as one of the best countries in the world in terms of freedom. I have my own beliefs and my neighbour has his own, I celebrate my own festivals and other people do theirs. I really love Canada’s diversity and respect.”

Back in their home in Nangarhar, east of Kabul, Farhad’s family used visit their relatives to celebrate Eid and Nowruz together, but here the family is living in a two-bedroom apartment with few friends and relatives around.

“The thing I miss the most is going to relatives’ houses and receiving Edi (gifts) from elders,” Baset said.

Reporting for this story was paid for through The Afghan Journalists in Residence Project funded by Meta.

The post From war-torn countries to a peaceful place: How Afghan and Ukrainian newcomers are coping in Canada appeared first on WorldNewsEra.