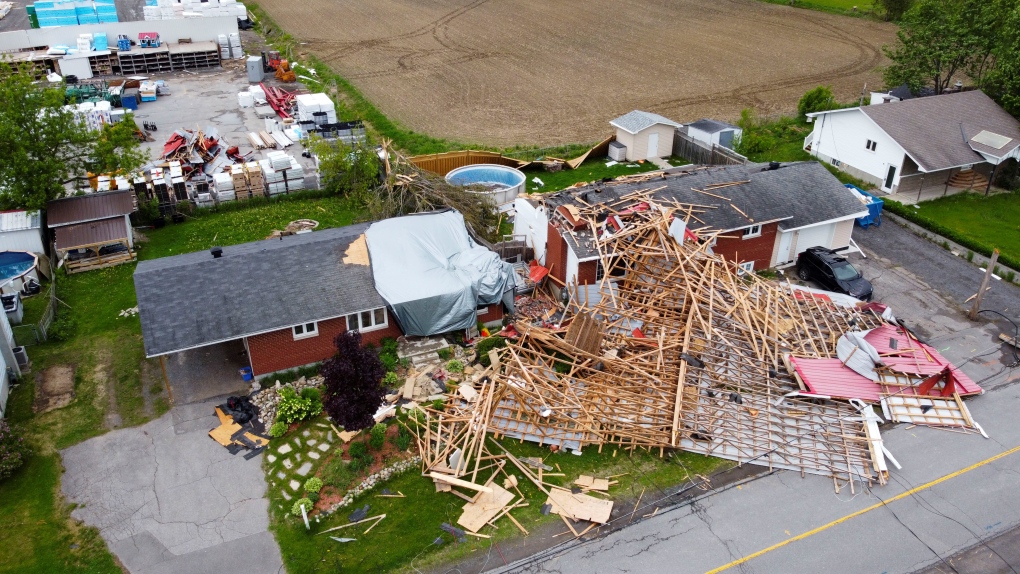 Canada truly had a historic year in weather, from what felt like never-ending rain for some to frigid temperatures for others. Several provinces broke decades-old records in temperatures and precipitation.

The national weather agency is reporting its top 10 weather events for the year, which saw an influx of all kinds of storms.

“This year it seemed to be about big storms,” David Phillips, senior climatologist at Environment Canada, told CTVNews.ca in a phone interview on Dec. 17. “From the derecho in Ontario and Quebec, Hurricane Fiona, the storms out west, the big flooding in Manitoba — all because of too many storms in a short period of time.”

“There’s never any safe havens from weather in Canada, we’re just too much between the cold air to the north and warm air to the south and that’s when weather wars break out,” Phillips said. “When you get the two fighting each other, the battleground for weather is Canada and we see it year after year.”

Post-tropical storm Fiona made its dramatic landfall in Atlantic Canada, flooding streets, homes and leaving thousands without power. Many Canadians are still recovering from its impact.

After wreaking havoc across the Caribbean as a Category 4 hurricane, Fiona arrived in Nova Scotia on Sept. 24 with wind speeds reaching 165 km/h and rainfall that saw up to 150 mm of rain in some areas. Across five provinces, wind gusts averaged up to 100 km/h and lasted between six to 12 consecutive hours.

Provinces like P.E.I, Newfoundland, Nova Scotia and New Brunswick were hit with the brunt of the storm as giant waves reaching up to 30 metres at their peak caused damaging erosion along the coastal region.

On May 21, Ontario and Quebec were subjected to an intense derecho windstorm that brought rain, hail and lightning and pulled some trees from their roots. The storm left 11 people dead.

At their peak, wind gusts reached 144 km/h in Lake Memphremagog, Que., and 132 km/h in Ontario’s Kitchener-Waterloo area. Three tornadoes were reported in Ontario, with the fiercest one landing in Uxbridge, reaching speeds at 195 km/h.

Power lines were also blown down by powerful winds, leaving more than a million hydro customers without power; 30,000 were left in the dark for an entire week.

The debris from a building in an adjacent lumber yard is pictured in an image made using a drone in a neighbourhood in Hammond, Ont., on Thursday, May 26, 2022. THE CANADIAN PRESS/Sean Kilpatrick

Manitoba recorded its wettest year as the flood season quickly ramped up in early May when Winnipeg reported 331.4 millimetres of precipitation, breaking the previous record of 325.4 millimetres reported over a century ago.

Environment Canada says rainstorms and heavy snowfall made for an intense flood season in 2022. During the winter, southern Manitoba marked the third-highest snowfall since 1872 with reports of snowfall reaching upwards 150 centimetres.

Along the Red River, several municipalities and nine First Nations communities experienced flooded roads and properties, leading to local states of emergencies for many. More than 1,000 Peguis First Nations residents were forced to leave their flooded homes as their community experienced the worst flooding since 2000. 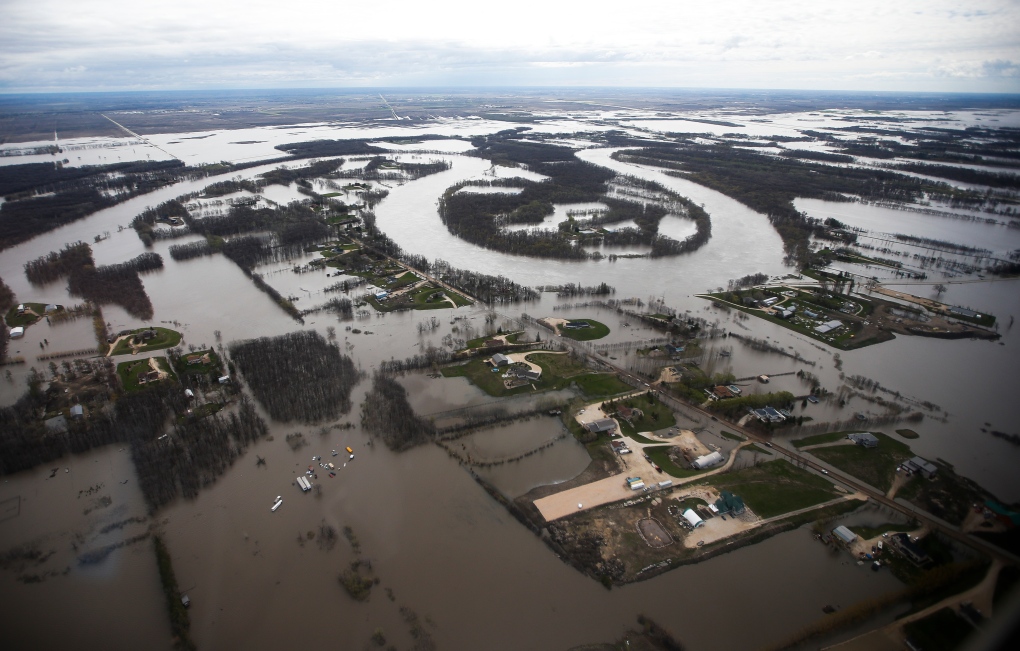 The Red River overflows its banks south of Winnipeg, Sunday, May 15, 2022. THE CANADIAN PRESS/John Woods

In British Columbia, Lytton topped its own record in September when temperatures reached 39.6 C. Similarly, parts of southern Alberta reached 38 C, while Swift Current, Sask. reported 36.4 C within the first week of that month.

Eastern Canada also got an extra four weeks of summer as many afternoons throughout October and November remained at or above 20 C. Additionally, sea-surface temperatures in the Atlantic were three to four degrees warmer than usual, causing crowds of people to soak up the sun at parks and waterfronts well into the autumn season. 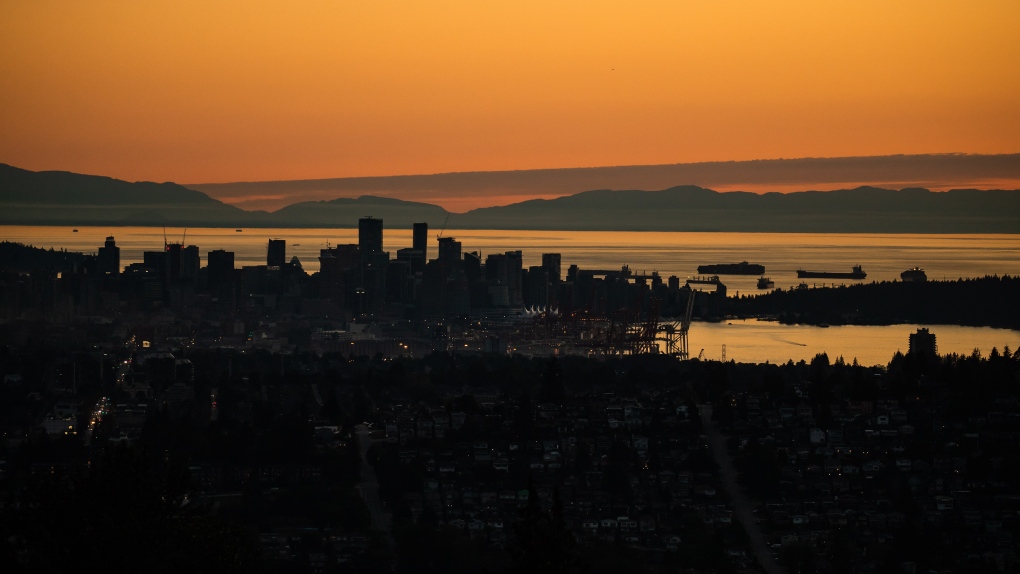 The downtown Vancouver skyline is silhouetted at sunset amid a heat wave in British Columbia on Monday, July 11, 2022. THE CANADIAN PRESS/Darryl Dyck

Both coasts were hit with wildfires this year over the summer.

British Columbia endured several blazes in Lytton, Penticton and the Metro Vancouver area, where smokey winds led to multiple air quality advisories across the province. Unlike last year, the wildfire season in B.C. wasn’t as damaging, with 1,050 square kilometres of area burned in comparison to the 10-year average of 4,232 square kilometres.

Newfoundland, however, had experienced its worst wildfire in over 60 years as lightning storms triggered extremely large fires. Paradise Lake reported a blaze that grew to 172 square kilometres, prompting for a state of emergency in the province, in fear that it would merge with another smaller fire. 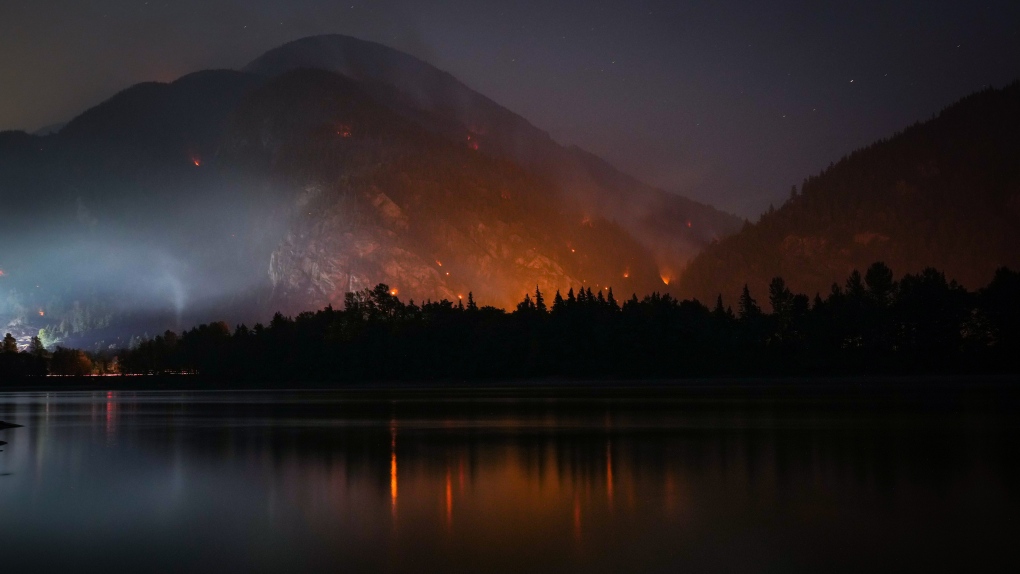 What should’ve been a sunny, warm Easter weekend turned into a chilly start to spring as British Columbia once again experienced another record-breaking weather event this year.

On April 16, Vancouver broke its previous record of -0.6 C first registered in 1896 by reporting -1.2 C on that day this year. That month saw 27 low minimum temperature records for many communities.

Environment Canada says while a dreary, cold spring may not be what British Columbians had in mind, the wet weather helped reduce the risk of early wildfires spreading across the province. Nonetheless, the cold weather also brought record amounts of snow in the mountains as snowpack was up 200 per cent above normal by June.

In July, the Prairies encountered four powerful thunderstorms that brought in strong wind gusts, heavy rainfall and even hail.

A tornado was reported in Bergen, Alta. and reached wind speeds up to 190 km/h, destroying five to 10 homes. The tornado’s power also caused damage to some parts of Calgary with marble-to-loonie sized hail and wind gusts reaching 104 km/h.

Four additional tornadoes were reported in parts of Saskatchewan in Paynton and Blaine Lake on July 8, with the following day registering a smaller twister near Argyle, Man. 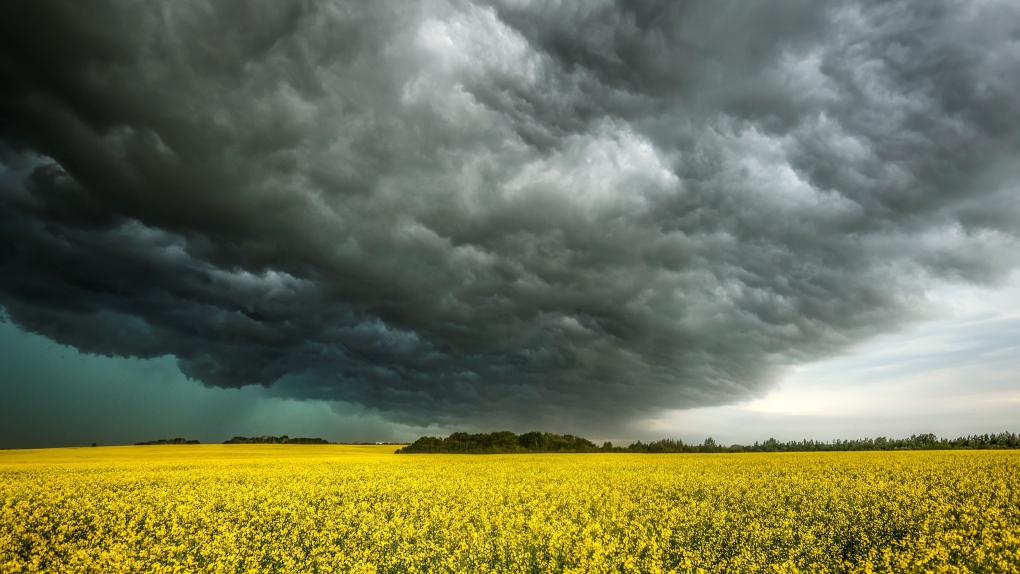 Montreal experienced a wet end to the summer with major urban flooding in September.

Phillips says these “street floods” are becoming more common as the effects of climate change progress.

“Because cities are growing, there’s more of us living there and the world warms up, the atmosphere holds more moisture and so not only does it rain harder but longer,” he said.

Downtown Montreal and its eastern suburbs reported getting 80 to 110 millimetres of rain — nearly a month’s worth of rainfall — within two hours. L’Assomption, Longueuil and Joliette, however, received even heavier rainfall, registering up to 120 mm of rain within the same amount of time.

9. FRIGID TEMPERATURES TO WELCOME IN THE NEW YEAR

Just before the end of 2021, Canadians felt colder than usual temperatures in time for the holidays.

Cold air from Siberia made its way to Canada, causing frigid temperatures from late December to early January. Key Lake, Sask. reported -42.1 C with a wind chill of -50 C on Dec. 26. 2021. In Edmonton, three of the five days at the end of the month reported temperatures of -40C and eight hours of wind chills at -50 C.

10. TRIFECTA STORM OF RAIN, SNOW AND WIND HIT THE ATLANTIC

Environment Canada ranked three storms over three separate weekends across Atlantic provinces as its 10th weather event of the year.

On Jan. 7, Northern Cape Breton, N.S. received most of the storm trifecta of rain, snow and wind. Snowfall in this region reached 30 to 50 cm and wind gusts blew up to 80 km/h.

Cape Breton once again took a hit on Jan. 15 when a similar storm brought in more snow, freezing rain and ice pellets. Newfoundland also reported blizzard conditions across the province, leaving thousands of residents without power.

To end off the month, a third storm hit New Brunswick and Nova Scotia with more snow and powerful winds. Nearly 60,000 residents in Nova Scotia were left without electricity after some parts received up to 40 centimetres of snow during the storm. 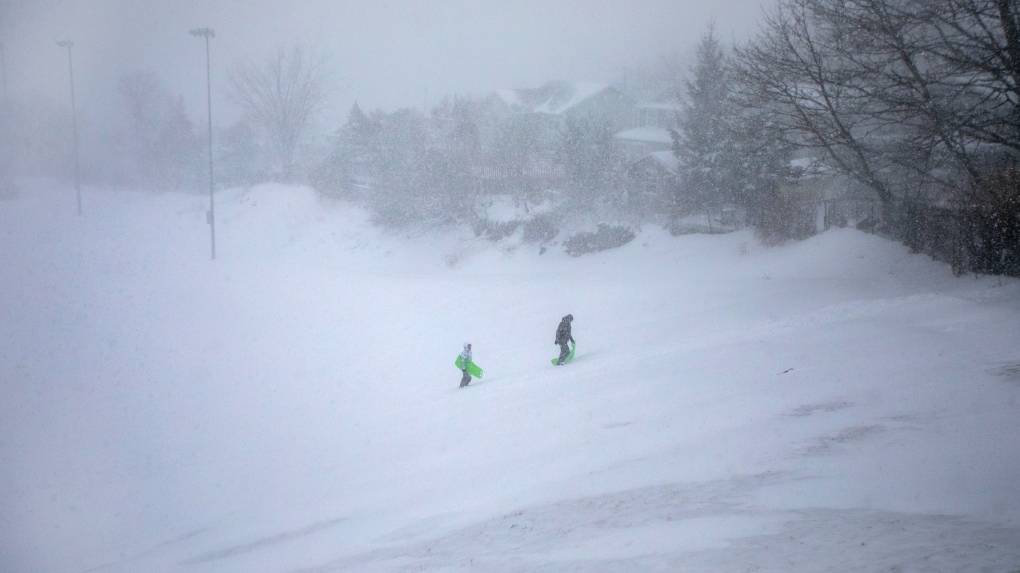 Sledders walk up a hill in blowing snow with their sleds during a winter storm in Halifax on Saturday, Jan. 29, 2022. (THE CANADIAN PRESS/Kelly Clark)