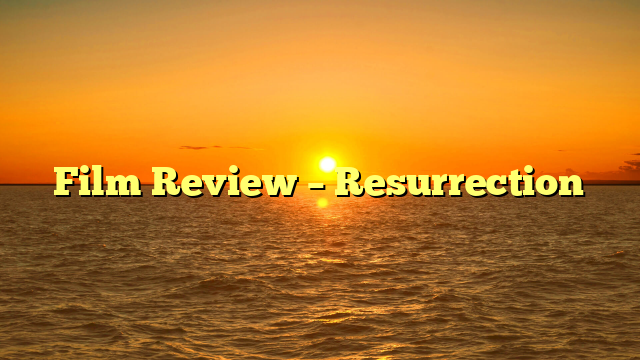 Resurrection (2022) is a horror film that isn’t concerned with cheap tricks or easy scares. It’s dread is psychological – an examination of a character slowly losing control. Written and directed by Andrew Semans, the narrative takes a methodical approach to its terror. It gradually builds in tension, reaching a climactic point that is nothing less than bizarre. But underneath it all is a layer of understanding, where we can see how a person goes from point A to point B, and how concern turns to desperation and then paranoia. That is its great accomplishment. It’s one thing to see a character descend into the abyss. It’s even more horrifying to feel their every thought as they get there.

This is yet further proof that Rebecca Hall is one of our most talented and underrated actors. Hall is no stranger to genre filmmaking, particularly when it comes to horror and thrillers. The Gift (2015), Christine (2016), and The Night House (2020) are just a few examples of Hall’s willingness to delve into the darker reaches of humanity. Her work here continues that trend. She plays Margaret, a single mother and executive in what appears to be the biotech industry. Margaret casts a façade of success and composure, but inside she is plagued with insecurity. For one, her daughter Abbie (Grace Kaufman) is heading off to college. Margaret’s over-protectiveness makes this transition difficult. But more alarming is the appearance of David (Tim Roth), a mysterious figure to whom Margaret reacts in sheer terror. Whether it’s at a conference, a store, or at a park, David magically appears out of thin air. Eventually, Margaret starts believing that his appearances are more than just coincidental.

This set up allows for an acting showcase between Hall and Roth. For Hall, she is given the opportunity to flex her skillset, and she more than meets the challenge. Every time Margaret sees David, her torment escalates. Yet, when she goes to the authorities, they explain they can’t arrest a man just for being in the same public space. Hall’s performance becomes more unhinged as she suspects David of sinister motivations. Semans’ writing peels away at Margaret’s layers bit by bit, exposing truths she has worked so hard to keep hidden. The more we learn of her and David’s past, the more disturbing the dynamic becomes. It’s a story of manipulation, abuse, and control – where characters live day by day on the precipice of disaster. No matter how much Margaret tries to run, David follows like an impending doom. Hall never loses focus of Margaret’s emotional arc. One extended monologue, where Margaret divulges important information about herself and David, is some of the finest acting you’ll see this year.

Hall’s performance works so well as a contrast to Tim Roth as David. He does not play the character as a traditional villain – there is no sneering or mugging for the camera. Instead, Roth underplays David almost casually. It’s all suggestion and inference. David can say an everyday line of dialogue, but the subtext is heavy with menace. That is what makes Roth’s casting so brilliant. He can have a reserved and polite conversation one minute, but the slightest change in expression can flip the mood immediately. David has a knack for sharing his schemes without saying them explicitly. A “favor” or a “kindness” may mean something to us but is defined differently for him. In fact, the more subtle Roth plays David, the more Margaret’s anxiety intensifies. You ever meet those people that can annoy and aggravate others without ever raising their voice? That’s David.

Semans’ direction (along with Wyatt Garfield’s cinematography, Ron Dulin’s editing, and Jim Williams’ music) builds this world entirely from Margaret’s perspective. When David is first introduced, we see him from far off in the distance in a wide shot positioned in center frame. Whenever he reappears, he gets a smidge closer, amplifying the sense of claustrophobia. Semans and the rest of the production swing back and forth, questioning whether Margaret’s panic is legitimate. As Margaret’s attention narrows in on David, so too does Abbie’s attention fall upon her. With each erratic decision, the tension between mother and daughter increases, adding a new layer to the narrative. Margaret’s confrontations with David are meant to protect Abbie, but is she doing more harm than good? Is Margaret making something out of nothing? Is David really who she thinks he is, or is she projecting her fears of losing Abbie onto him?

The film doesn’t answer these questions outright, but it sure takes a wild swing addressing them. The second and third acts (especially the third act) is where things really get strange. The tables turn, so to speak, as a reflection of these characters’ mindsets. It’s at this point where Resurrection will either win its fanbase or lose audience members. I don’t think this is the kind of experience where people will walk out shrugging their shoulders impassively. Interestingly, the writing explicitly points out its surprises early on, but it’s so off the wall that most will certainly not believe it. The fact that Semans has the confidence to take his story to this conclusion is admirable. It shows how much control he has with his material, even if it means going to bloody and violent territory.

Is Resurrection a story of motherhood, victimization, madness, or redemption? Maybe a little of all. It is undoubtably an effective and penetrating character study, rotating around a person whose obsessions has clouded every part of their life.  Thematically, it brings up topics of conversation that are very much present in the real world. As a genre film, it keeps us on the edge of our seats with its striking imagery. I was with it from beginning to end. Although I may not have learned anything new about the evils of society, this was a dark and creepy journey I was willing follow every step of the way.