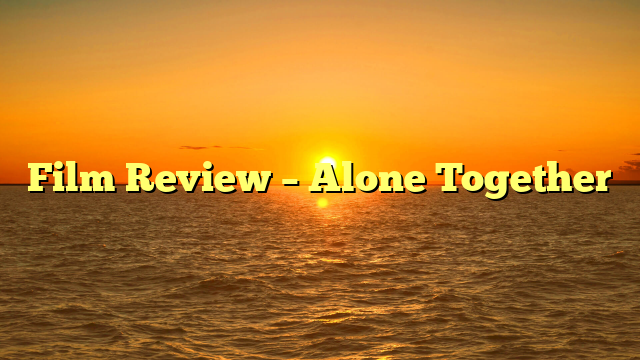 Now that we are well over two years into the Covid-19 pandemic, society has adapted in various ways. In some sections, people have returned to their normal way of life before March 2020. For others, daily life has been a series of changing developments – from wearing a mask in crowded areas, ordering delivery instead of going to a restaurant, to constantly having to balance the risk/reward factors of social activities. Whatever one’s belief is regarding Covid, I think we can all agree that it has taken a toll on us in one way or another. It’s something that is going to be examined and studied far longer than any of us will be around.

As time moves forward, cinema gradually follows behind, detailing events as we move along. Covid is no exception. We are seeing more films and television shows incorporating the virus as an active character. Locked Down (2021), KIMI (2022), and The Bubble (2022) are just a few examples of how social distancing, testing, and mask wearing have become engrained in our culture. Alone Together (2022) is the latest entry into this growing subgenre. Written, directed, and starring Katie Holmes (her second effort holding such positions), this is a romantic drama set during the early days of the pandemic and the ensuing lock down. We all remember being forced to bunker in our homes to help “flatten the curve.” This was a time of uncertainty, where we weren’t sure what the disease can do, how to stay safe, or who was considered an essential worker.

This is a strange backdrop for romance to blossom, and while Holmes’ writing and direction does its darnedest to balance the conflicting tones, it never plays out cohesively. Scenes of characters falling for each other are juxtaposed with news reports of businesses shuttering and hospitals being overburdened with patients. We routinely get audio recordings of former New York Governor Andrew Cuomo delivering updates as to the status of New York City. This inclusion is unfortunate given the allegations that have befallen the former governor not long after the pandemic started.

Holmes plays June, a New York City food critic. In attempt to temper the anxiety and stress of the pandemic, June and her boyfriend John (Derek Luke) book a B&B in country to stay during lock down. Unfortuntely, family issues force John to stay behind, leaving June by her lonesome. Things get interesting when June finds out that their retreat has was accidentally double booked with Charlie (Jim Sturgess). Charlie is a fellow New Yorker who decided to get out of the city to clear his head after a break up (isn’t that convenient?). Out of pride – and perhaps foolishness – both June and Charlie decide to share the space until either the mix up can get sorted out or until the lock down ends (heh). Any guesses on where things will go from here?

In tone and execution, Holmes tells her story in a reserved, leisurely fashion. It’s not a big surprise that June and Charlie’s initial awkwardness toward one another will eventually turn into understanding and then attraction. But this single location courtship doesn’t have a lot of juice. The writing and direction takes the familiar story beats of a romantic drama, but there isn’t any spark to keep us drawn in. Charlie is a nice guy who has a nice relationship with his mother (Melissa Leo). June is so nice to John that she is willing to put up with the fact she has been put on an island with a stranger. Charlie and June have pleasant conversations about their pasts, their ambitions, and their families. Thing sing karaoke, go on bike rides, and eat MacDonald’s burgers in the car. This is about as plain a story as you can get. Even when John finally decides to show up and turn the narrative into love triangle, there is never any perceivable tension. These characters are constructed to never go above or below milquetoast.

I say this fully aware that – if this were real life – it would be great to encounter people this mature about their love lives. But in terms of film, there isn’t much here to keep us engaged. Scenes stroll by even handedly. When characters disagree or show vulnerability, the execution is so middling that emotional highpoints just kind of fizzle out. We get montage after montage of June and Charlie laughing and loving, backed by a gentle piano score. This method is repeated so often that it becomes a distraction. It’s one thing for a movie to avoid the pratfalls of melodrama, but it’s another to be so emotionally indistinct to the point of lacking a pulse.

This is not to say that Alone Together is bad – there are elements to admire. Holmes shows a clear desire for genuine, human connections, free of pretense or exaggeration. While I appreciate the attempt, the overall piece left me feeling empty – as though the time spent with these characters left no emotional or intellectual residue. It looks nice and the performances are well done, but this feels like a shadow of better romantic dramas.