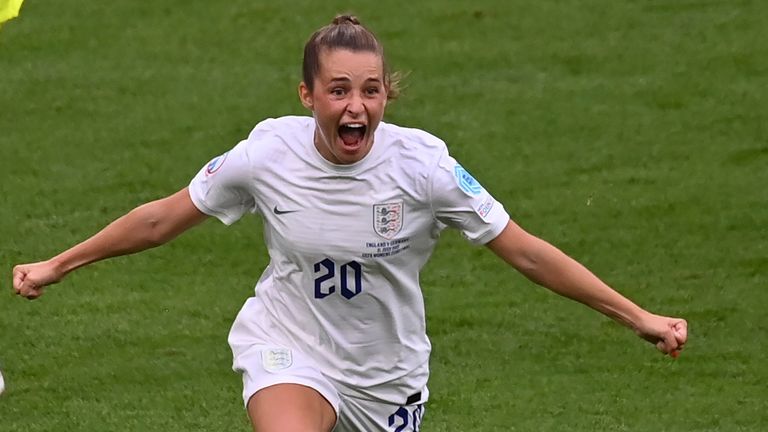 In front of a record-breaking crowd of 87,192, Kelly’s 110th-minute winner secured England the country’s first major international trophy since the men’s team won the World Cup in 1966.

In a final for the ages, Ella Toone clipped the Lionesses ahead with a superb lob just after the hour mark following a goalless but entertaining first half.

A superb Keira Walsh pass set up her team-mate, curling the ball around the German defence and into Toone’s path. She spotted goalkeeper Merle Frohms off her line and went for the lob, chipping the ball curling past the German stopper to send Wembley into raptures.

But eight-time champions Germany were not to be down for long as Lina Magull equalised in the 79th minute. Sydney Lohmann found Tabea Wassmuth inside the area, with the latter’s cross turned home by the midfielder.

The first period of extra-time was a cagey affair with neither side wanting to make an error, but England made the breakthrough with 10 minutes to play. Germany were unable to clear a corner, with Kelly’s own shot coming back to her feet inside the six-yard box. She was there again to turn past Frohms and win England their first major trophy.

It was a cagey start in front of a record-breaking crowd at Wembley, but England started the brighter. Inside four minutes, Fran Kirby sent in a cross, met by Ellen White, but her header was straight at Frohms.

Germany had their best chance of the half in the 25th minute. Georgia Stanway inadvertently nodded on a Germany corner, with the Lionesses scrambling to clear, before Mary Earps pounced on the loose ball.

England could have taken the lead just before the break. Beth Mead picked out White in the middle, but the striker was leaning as she hit it, sending the ball rising over the bar.

Germany should have taken the lead five minutes after the break. Magull poked the ball just wide of the post after finding herself a slither of space, before Toone fired England ahead just after the hour.

Martina Voss-Tecklenburg’s side should have equalised soon after. Magull again with the shot to test England, but her curling effort could only find the post. Earps was then there to scoop up the rebound, but she could not stop Magull from equalising with 11 minutes to play.

It was a classic extra-time period – neither side wanted to give anything away. An agonising penalty shootout against the Germans looked to be on the cards.

But then Kelly – aged just 24 years old – scrambled home the winner to send Wembley into overdrive, with England seeing out the game to write their names into history.