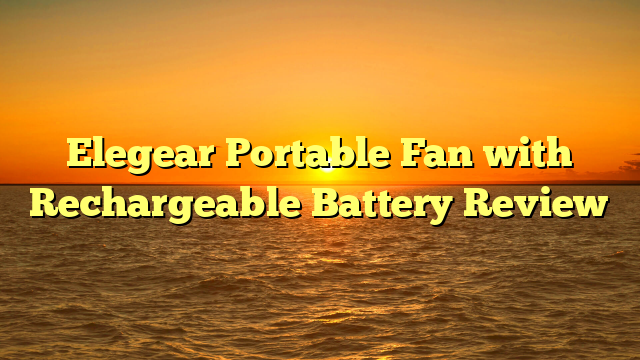 The Elegear portable fan is proof that these devices don’t need to look like a toy and be anemic when it comes to moving the air in the room. Not at all, the Elegear portable fan can be easily carried along when you travel due to its foldable design and it can still provide a good performance thanks to the fairly large battery (7,800mAh), as well as the seemingly powerful motor.

But, the foldable fans have all been using pretty much the same design approach, so most of them do end up looking very similar, so what can the Elegear portable fan do that other devices from the competition can’t? The device uses a double-layer 16-blade fan which, if it’s as the manufacturer advertises, it should help push air up to 16.4 feet away. Obviously, we’re going to put that to the test, but it’s interesting to see these type of blades in action.

And there’s also a digital display with four buttons, as well as the possibility to control the fan with a remote. But, as you will see the remote control is annoyingly limited, so you’ll most likely end up leaving it in the package. As anticipated, especially due to the price tag, this is not a smart device, so there is no app and no integration with a smart home, but I am not sure many people care for these functions on a portable fan. So, without further ado, let’s put the Elegear portable fan to the test and see if it’s a reliable device to have during this insane summer.

Design-wise, the Elegear portable fan does follow closely the other foldable fans from the market, so it can be bent and positioned in a ridiculously compact shape, measuring only 11.0 x 11.0 x 5.4 inches (28.0 x 28.0 x 13.7 cm). And that’s how you get it from the package, along with a dedicated cylindrical textile case to help carrying the fan around in a more convenient way.

Still, the Elegear portable fan itself has a retractable silicone handle for when you want to quickly move the device from one room to the other. You will notice that the device is made of three main parts, the base which is surprisingly heavy (it needs to be this way to keep the fan into place), the telescopic arm which is retractable and the blades section. To unfold the device, you need to raise the blades section, lock the telescopic arm (move the cylindrical part clockwise) and then you can raise it as much as you want, depending on where the fan will end up being positioned.

If it’s on a desk, then there’s no real need to raise it; otherwise, the Elegear portable fan will allow you to raise it as high as 3 feet (94cm). It’s obviously not incredibly tall, but you do get the option to adjust the blades section to an angle of 180 degrees. The base also has a motor that rotates the fan so it can cover a larger area (at an angle of about 90 degrees).

I do need to mention that the entire device is made of plastic and it is covered by a white matte finish, but even so, due to its weight (4.8lbs or 2.2kg), the fan seems to be balanced enough as to not seem feeble or too heavy to carry around. The base of the Elegear portable fan is round and it does have a small screen pointing upwards, as well as four buttons (Power, Speed, Rotation and Timer). On the border of the base, there is the aforementioned silicone handle and a hole where you can insert the remote.

Flip the fan upside down and you’ll also see the power connector and the four silicone feet. I know that they should keep the Elegear portable fan in place, but the device still moved around without that much resistance on porcelain tiles. Then again, the base is heavy enough to keep the fan steady, so I wouldn’t worry that much about it.

There are four buttons on the base of the Elegear portable fan, the first powering on or off the device and the second has the role of adjusting the speed. There are a total of nine speed modes, the last showing what seems to be an Eco icon, but it that it’s just to show that you’re using the Natural Wind mode.

The third button enables the Rotation mode, where the base moves from side to side to an angle of about 90 degrees (you’ll also get an icon on the screen) and the last button allows you to set a Timer. The way to do so is by pressing the button until it reaches the preferred hour – so it’s pretty much a countdown timer until the fan turns off. Be aware that it can only go up to 8 hours. As for the remote, it also has four buttons, but their functions differ a bit.

And they do in a meaningful way because the On/Off button is missing. Indeed, you can set the Speed, go directly to the Natural Wind mode, set a Timer or enable the Rotation mode. It’s a bit frustrating considering that you can’t turn on or off the Elegear portable fan remotely, but I suppose it could make sense, kind of. To turn the fan on or off remotely, it needs to always use some power from the battery, so I think that the manufacturer decided against it to preserve that tiny amount of battery life. Was it the right choice, I am not so sure.

The Performance of the Elegear Portable Fan

The Elegear portable fan is not a large device and it won’t move air in a large open space in any truly meaningful way, but it should prove to be excellent for offering relief during a hot summer day in smaller area, ideally near a desk or even a bed. So, I decided to check out how far the fan can actually reach in a straight line, depending on the speed of the fan. The level 1 speed fan can reach up to 10 feet, but only if you’re directly in front of the fan and I think it diminishes its perceived performance at about 7-8 feet.

After that it’s just a very, very light breeze. Then, from level 2 to level 4, you get a more meaningful amount of air coming your way, but it still goes as far as 8 feet in terms of efficiency. Going to the level 5, it does seem that the air can go a bit farther away (about a foot more). From level 5 to level 8, you gain about a foot and a half, but, just like before, it’s only going to have a proper impact at the higher level (depending on how much air you need).

The fan speed level 9 is the most interesting because it seems to be a bit more powerful than the previous level, but it’s not constant, it goes in bursts. A few seconds seems like it turns off and then bam, you get blown away by a powerful breeze. The manufacturer calls this mode Natural Wind and I guess I see why.

The next aspect that I measured was the noise. I do appreciate a white noise machine, especially during the night, but not all people like to hear constant loud buzzing. That being said, I measured the sound that the Elegear portable fan was producing about 2 feet away from the fan (I assume this is the distance that most of you will keep between the bed and the fan) and, at level 1, it was about 43dB. This is what you get when you’re trying to sleep, so it’s not really that silent.

It’s not incredibly noisy either, so if you don’t mind some white noise, I guess you could make it work in your favor. From level 2 to four, it oscillates between 45 and 46 dB , while from level 5 to 7, it does get a bit more noisy, going up to 48dB, so it’s not that suitable for sleeping. The level 8 and 9 go between 50 and 51dB, so they’re definitely the loudest but not as loud as I thought they would get, which can be seen as a plus.

The manufacturer advertises up to 10 hours of battery life which is great, but be aware that it’s on the lowest fan setting. And, in my test, it did go to about 9 hours, so it’s not that far from the advertised estimation.

But, rising up the fan level will cut fairly deep, depending on how much airflow you need, going down to about 3 and a half hours at level 7 or 8. Also, take into consideration that batteries tend to lose their overall charge in time, so I don’t think I will see the same performance in a couple of years. Lastly, be aware that the battery charges slowly, so it needs about 4 hours to go from 0 to 100%.

Elegear does give you the opportunity to clean the fan and to do so, you need to identify and remove the single screw located on the rear side of the blades section. Then, the manual says that the front side needs to be rotated anti-clockwise. You’re not going to have any chance to do so with your bare hands, just use the screwdriver to gently push the panel.

Then, the part should easily pop off, allowing you to thoroughly clean the blades – it’s also possible to replace them this way, in case they get damaged. Be careful when you put it back on because you need to align the hole for the screw.

While the concept behind the Elegear portable fan isn’t really new, it is perfectly fine as long as the device can raise up to the expectations. And it does since the fan can easily be move around, it can push air decently far and the battery life is good. It’s also not that noisy. There are some shortcomings as well, such as the limited remote control functions and I wouldn’t have mind if the fan was a bit more rugged and could extend higher. But, considering the price tag, it can be considered a suitable purchase when you travel and don’t want to bother using those toy-like fans that barely do anything in terms of airflow.