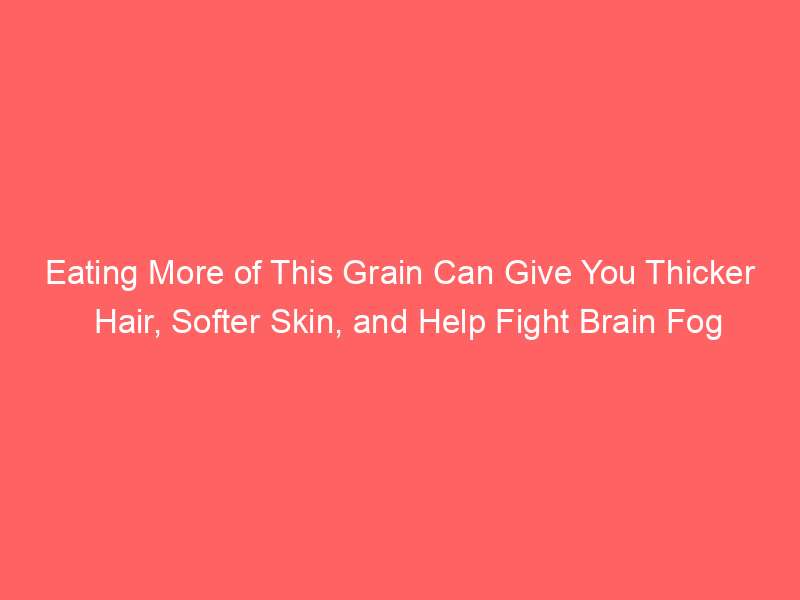 Circulating through the same grains throughout the week? Quinoa, rice, and oatmeal are delicious in so many forms, but sometimes it’s fun to try something a little different. A recent craze is gluten-free, slightly nutty in flavor, and fluffy in texture. It’s name is fonio.

As the smallest member of the millet family, fonio has been cultivated in West Africa for over 5,000 years. This nutritious grain is a staple for an estimated 4 million people, as it grows quickly and survives in drought. The best part? Its versatility. Create porridge, whip up a couscous, pop it on the stove like puffed quinoa, or grind it into flour for baking. At roughly the same price as quinoa (buy from Thrive Market, $5.39), this super grain makes for a delicious and practical addition to your meal rotation.

The Nutritional Makeup of Fonio

According to Dr. Jerry Bailey, certified nutritionist, acupuncturist, chiropractic, and functional medicine physician at Lakeside Holistic Health, fonio is a great swap for simple carbs like white rice. “The make-up of fonio is what makes it such a healthy and complex grain compared to typical mass-produced grains/crops,” he says. “Per half cup of cooked fonio you get 39 grams of complex carbohydrate, 2 grams of protein, 0.5 grams of fat along with 4 percent of your daily fiber requirements.”

It’s true that this grain is carb heavy. “There are two grams of protein in a half cup serving of fonio, but the protein content varies by cultivar and other factors. It is lower in protein than the major grains,” says Julie Miller Jones, PhD, LN, CNS, and Grain Foods Foundation expert. “Fonio is a source of starch – about 80 percent of the grain is starch by dry weight.”

Fonio does offer a healthy dose of carbohydrates, but it still has a low glycemic index (GI)  at about 49 in type 2 diabetics and 35 in non-diabetics. (Why would the GI change from person to person? GI measures how much a food increases your blood sugar levels on a scale of 0 to 100, with 100 being pure glucose. Many foods cause a bigger rise in blood sugar in diabetics.)

The Importance of Amino Acids

Cysteine is crucial to hair growth, as it boosts strength and elasticity and enhances hair texture. Methionine, which the body uses to grow and repair tissues, also promotes healthy hair. In addition, it improves tone and pliability of the skin and strengthens nails. Research shows that leucine may help in healing skin and bones. Valine is important for muscle growth and tissue repair.

Even though this grain is an incomplete protein, the amino acids it does have are beneficial. “Amino acids are the building blocks for proteins that develop into muscle tissue, immune cells, and in particular glutathione, our master antioxidant,” says Dr. Bailey. (Glutathione, which is produced by the liver, is made up of three amino acids: glycine, cysteine, and glutamic acid. It helps build and repair tissues and aids in immunity.)

Fonio might not be as high in protein as quinoa or high in fiber as oatmeal, but it’s still a healthy, tasty grain with important benefits. Whether you use it to make a garlic-y pilaf or whip leftovers of it into fluffy pancakes, we’re sure you’ll find creative ways to serve it up!

This article originally appeared on our sister site, For for Women.

Woman’s World aims to feature only the best products and services. We update when possible, but deals expire and prices can change. If you buy something via one of our links, we may earn a commission.
Questions? Reach us at shop@womansworld.com.