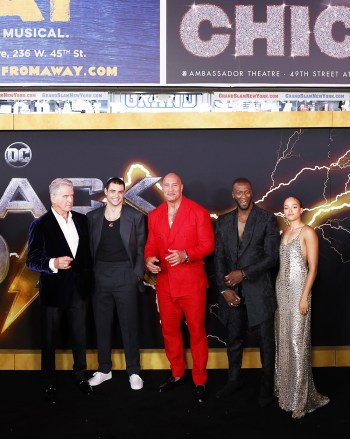 After fan speculation that Black Adam would get a sequel, Dwayne ‘The Rock’ Johnson took to Twitter to share an update indicating that at least for now, there won’t be one. “My passionate friends, I wanted to give you a long-awaited Black Adam update regarding the character’s future in the new DC Universe,” Dwayne shared in the statement, posted Tuesday, Dec 20. “James Gunn and I connected, and Black Adam will not be in their first chapter of storytelling. However, DC and Seven Bucks have agreed to continue exploring the most valuable ways Black Adam can be utilized in future DC multiverse chapters.”

The Jungle Cruise actor continued, stating in no uncertain terms that he has a vested interest in the DC universe, despite the surprising news. “James and I have known each other for years and have always rooted for each other to succeed,” he wrote. “It’s no different now, and I will always root for DC (and Marvel) to win and WIN BIG. You guys know me, and I have very thick skin – and you can always count on me to be direct with my words. These decisions made by James and DC leadership represent their vision of DCU through their creative lens.”

“After 15 years of relentless hard work to finally make Black Adam, I’m very proud of the film we delivered for fans worldwide,” he concluded the lengthy post. “I will always look back on the fan reaction to Black Adam with tremendous gratitude, humility and love.We did great. To my very passionate and vocal Black Adam/Super Hero genre fans – I love you, THANK YOU, and I will ALWAYS LISTEN TO YOU and do my best to deliver and entertain you. What a helluva month – now we all need some Teremana. Have a productive week and HAPPY HOLIDAYS to you and your families! DJ.”

The news comes on the heels of what appears to be some serious restructuring for the DC Universe. On December 15, after previously announcing he’d return to the role of Superman, Henry Cavill took to Instagram on December 14 to confirm that he actually isn’t. “I have just had a meeting with James Gunn and Peter Safran and it’s sad news, everyone,” the Enola Holmes actor, 39, wrote in a statement. “I will, after all, not be returning as Superman. After being told by the studio to announce my return back in October, prior to their hire, this news isn’t the easiest, but that’s life.”

While Henry seemed to be disappointed, he also graciously accepted the decision. “James and Peter have a universe to build,” he wrote in part. “I wish them and all involved with the new universe the best of luck, and the happiest of fortunes.”

Simone Johnson: 5 Things About ‘The Rock’s Daughter, 21, Who Just Made Her WWE TV Debut

The post Dwayne Johnson Finally Gives An ‘Update’ About The Future Of Black Adam After Henry Cavill’s Superman Exit appeared first on WorldNewsEra.