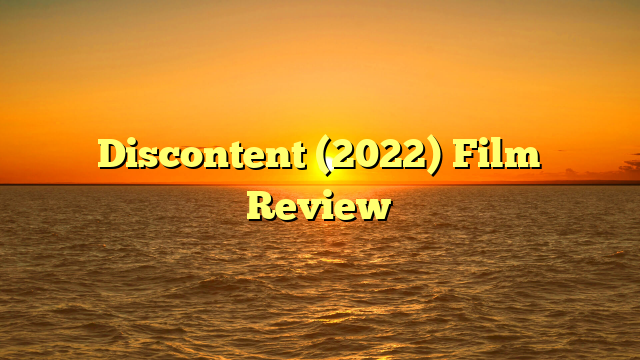 Four internet-addicted, interconnected millennials fumble through the modern maze of sex and connection as their online addictions spiral out of control and into the void of an alien disguised as a human female.

Discontent (2022) is an Australian feature anthology television series, with a narrative presented in six parts, by focusing on four technology driven characters and the bizarre circumstances occurring in their daily lives. It is not a straightforward interweaving of stories, with simple, easily digestible story beats being offered up to viewers, however, there is much up for interpretation here.

The anthology style chosen by director Sam Rogers is certainly utilised effectively, with the different characters and circumstances varying from somewhat ordinary with a Tinder hookup resulting in the pair only inhaling laughing gas together, to the totally bizarre, with an alien disguised as a human female making herself ill from allowing her stomach to feed off previously introduced characters. There is an undeniable air of charm and an endearing quality to the overall experience of watching this fifty minute compilation of comedic scenarios, which do not offer much relevance for any overarching story thread, but do entertain in their own little ways.

We begin with Sandra, a mysterious woman with a creepy way of smiling at people to lure them in, who feeds her voyeuristic addiction by constantly buying random items from strangers on online classifieds. This first sketch is paced well and succeeds at drawing you in to other goings on, with the next short seeing neglected girlfriend Milly trying and failing to get the attention of her phone addicted boyfriend. This segment features a great scene of the couple sitting facing away from each other as Milly announces a pretend pregnancy in a last ditch attempt to receive acknowledgement, with their lines delivered to the camera instead of each other, signifying their emotional distance.

One of the funniest stories revolves around Archie, who refuses to pay for a streaming service after his ex-girlfriend changes the password and resorts to online dating to help him watch his shows. Due to an embarrassing injury he received during sex, he finds it difficult to be successful in his pursuits and the the strange side to online dating is also demonstrated in Apple’s attempted hook up with a Tinder match going astray. The final segment of the film is certainly the most unsettling, with a sci fi angle fitting snugly into the already odd, unique stories presented to us previously. Strong coloured lighting and a calculated performance from Chloe Martin as the humaoid alien, combined with a deeply chilling score by Chiara Costanza and Andrew Coates makes for a disturbing viewing experience when Maya consumes her victims.

Although lacking in any concrete answers or explanations for peculiar plots, Discontent manages to be completely worth while for its intriguing presentation, thought provoking themes on how our society has become so technology integrated, charming performances and jokes and sound direction from Rogers.