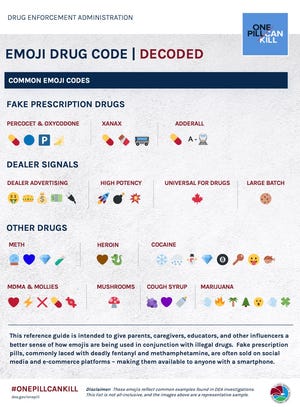 Pills made from deadly fentanyl and disguised to look like legitimate prescription pills continue to pour into the United States, including Ohio and Northern Kentucky, at unprecedented rates.

The U.S. Drug Enforcement Administration Wednesday that its staff seized more than 50 million fake prescription pills tainted with fentanyl last year, which is 150% leap from the 20 million-plus fakes agents seized in 2021.

In Ohio, Michigan and Northern Kentucky alone, DEA agents seized more than a quarter-million (280,000) counterfeit pills containing fentanyl. The fake pills, manufactured largely in Mexico, are the newest and deadliest threat to people who use drugs, experts say. That’s because they appear to be innocuous – regular prescription pills such as oxycodone or Xanax or even the stimulant Adderall. But if an unwitting person who does not normally take fentanyl ingests even one pill, it has the potential to be fatal.

“The ability for fentanyl to be morphed into prescription pills is concerning not only because we will see a huge increase in supply,” said Newtown (Ohio) Police Chief Tom Synan, “but it has the potential to touch a market that is not typically exposed to opioids – especially one that is as powerful as fentanyl.”

Synan, a coordinator with the Hamilton County Addiction Response Coalition in Ohio, is nationally and locally recognized as an expert in the opioid epidemic and an advocate of healthcare instead of punishments such as jail for people with substance use disorder.

The Cincinnati Enquirer, part of the USA TODAY Network, reported the onslaught of the pills and their dangers in 2022. Hamilton County Crime Laboratory alone had seen a 99% jump in the pills from a variety of law enforcement agencies from 2020 to 2021, and police from Cincinnati, Evendale, Lockland, Butler County sheriff’s and other departments submitted the pills along with the area’s DEA agents.

The pills are especially dangerous to kids who often buy them on Snapchat and other social media sites, DEA officials say, and sometimes discuss their dealings with pills in code, with texted emojis.

Substance use disorder treatment providers continue to warn about the pills. Dr. Mina “Mike” Kalfas told The Enquirer in December he has seen patients who mistook fentanyl pressed pills for prescription pills. “For example,  I had a guy come in and say, he took a ‘couple oxys’ for a back problem. I said, ‘That’s odd, there’s no oxycodone in your urine. It’s all fentanyl.’ The patient was stunned.”

“The development of these counterfeit pills shows how fentanyl continues to escalate,” Synan said. “When you think that fentanyl has reached its peak, the illegal distribution network is able to find another delivery system that increases its market and broadens the deadly threat of fentanyl.”