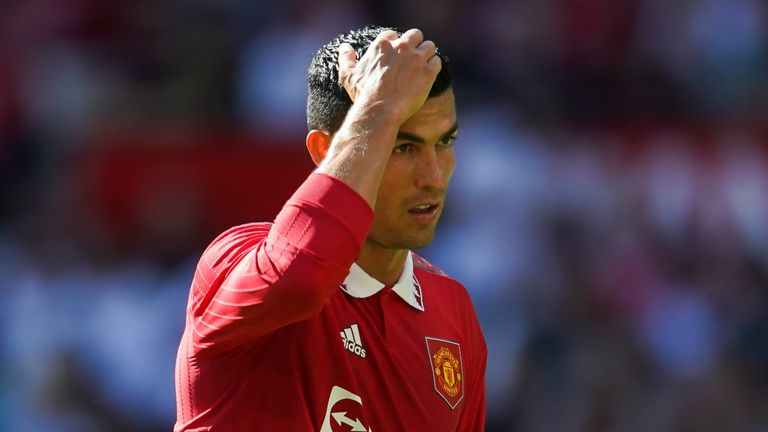 Cristiano Ronaldo made his first pre-season appearance for Manchester United in Sunday’s 1-1 draw with Rayo Vallecano after a summer of speculation about his future.

Pictures of Ronaldo leaving Old Trafford prior to the final whistle emerged on social media, but United have clarified he was one of a number of players to do so, and it is not an issue for the club.

Ronaldo, who has told United of his desire to leave the club on multiple occasions, played for the first half before being taken off for eventual goalscorer Amad Diallo.

The 37-year-old’s reduced minutes came as no surprise, with manager Erik ten Hag admitting Ronaldo is a long way behind his team-mates in terms of fitness ahead of the match at Old Trafford.

“He is not on the level of the rest of the squad because he missed a lot of weeks,” the Dutchman told Viaplay. “But he needs games and he needs training, a lot.”

Ronaldo was absent for United’s pre-season tour of Thailand and Australia while he dealt with a family issue and only returned to training on Tuesday, when he and his agent, Jorge Mendes, held further talks about his future.

United are insistent that they will not sanction the sale of the four-time Ballon d’Or winner, who is firmly in the plans of Ten Hag.

Despite Ronaldo’s insistence on leaving, there was no sign of ill-will toward him from the Old Trafford faithful, with fans greeting him with big cheers as he emerged from the tunnel. He posted on his social media channels after the game: “Happy to be back”.

It remains unclear where Ronaldo’s potential exit routes lie, as Chelsea no longer appear to be an option while Bayern Munich and Atletico have appeared to publicly rule out a move.

The game against Rayo Vallecano was United’s final match of pre-season before their Premier League opener against Brighton next Sunday – live on Sky Sports.

Ten Hag: We’ve made good progress, but room for improvement

Manchester United manager Erik ten Hag has overseen six matches in pre-season – losing just one on the way – and has been pleased with the performances, but says he is expecting more development from his new squad.

“Overall, definitely (happy with preseason), I think we make a good pre-season and we make good progress,” Ten Hag told MUTV. “We are ready for the season, but I know there is still a lot of room for improvement and we have to improve.

“That is also a process that continues in the season, but for next week it’s about the result as well. It (team selection) was a mixture of experience and youth, some guys met each other for the first time today, so what can you expect?

“You saw the attitude was great, they fought and worked for each other and it was positive. We created a lot of chances, okay, we also conceded chances, but I think we have to be satisfied with the performance.”

“With exactly a week to go until Man Utd kick off their Premier League season at home to Brighton – live on Sky Sports – new manager Erik ten Hag will have learned plenty from their latest friendly, their last before the real action gets under way.

“The Dutchman, having watched his new side lose 1-0 to Atletico Madrid 24 hours earlier, fielded a much-changed lineup, although he did start with new signing Martinez alongside Varane at the heart of the United defence, with the Argentine impressing before being hooked on the hour mark.

“Youngster Laird also caught the eye at right back and interestingly, Ten Hag opted to utilise both summer signing Eriksen and Van de Beek as holding midfielders in front of his back four.

“The experienced Dane ran the show from the centre of the park before also being rested with half an hour to go, but it was youngsters Tahith Chong and Garnacho Ferreyra who both really impressed with their energetic performances in attack.

“As for the main man himself, Ronaldo started up front, but after an excellent beginning, the 37-year-old’s influence then began to fade, before being hooked at the break.”