England’s hero Chloe Kelly said she was living the dream after firing her country to Euro 2022 glory.

Kelly came off the bench to score a 110th-minute winner and give the Lionesses a 2-1 win against Germany in the final at Wembley.

After Ella Toone’s opener had been cancelled out in normal time by Lina Magull, the Manchester City forward poked home from close range to spark euphoric scenes at the national stadium as England Women went on to win a major tournament for the first time.

Kelly was more interested in singing ‘Sweet Caroline’ than answering questions in her flash TV interview, but did say this was her dream growing up.

“Oh my God, look at them, it is amazing, thank you to every single person that supported us,” she said on the BBC, indicating the crowd in the background. “This is unreal… Sweet Caroline!

“It’s amazing, thank you everyone, this is what dreams are made of, as a young girl watching women’s football. Wow, this is unbelievable.”

They think it’s all over? It’s only just begun…

Kelly’s story is made even more memorable by the fact that she only came back from a serious cruciate ligament injury in April.

She added: “Thank you to everyone who played a part in my rehab. I always believed I’d be here, but to be here and score the winner, wow. These girls are amazing.

“This is amazing, I just want to celebrate now.”

England’s maiden success has been masterminded by Sarina Wiegman, who has now won back-to-back European Championships after her 2017 success with the Netherlands.

The Dutchwoman said: “We won the cup. It is unbelievable. It is incredible.

“If you really want to win and become better every single day, that is what I have noticed, and it is incredible, they want to do it together.

“We agreed on a couple of things about behaviour and they weren’t just words, we lived it. The game was so tight, there was a little bit of fight in there, but who cares, we won 2-1. We are European champions.

“We broke through barriers against Spain and we had to do it again. I don’t have any secrets. I don’t think I have realised what is going on, I need some time.”

Williamson: The legacy of this tournament is a change in society

After the tournament produced record attendances, including the highest ever in a European Championship final, England captain Leah Williamson wants the success to mean something in the future.

She said: “The legacy of this tournament is a change in society, it is everything that we have done, we brought everybody together, we got people at games.

“We want them to come to WSL games, the legacy is this team are winners and that is the start of a journey.”

Williamson also described the victory as “the proudest moment of my life”.

“It is the proudest moment of my life until the day I have kids I suppose. I am taking everything in, every piece of advice was take every single second in so I can relive it forever. I’ll be reliving that for a long time.”

She said: “The legacy of this tournament is a change in society, it is everything that we have done, we brought everybody together, we got people at games.” 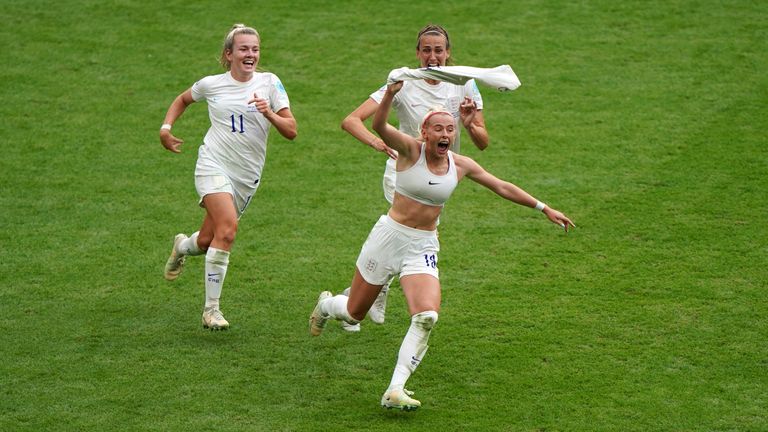 Beth Mead won the Golden Boot and was named player of the tournament, 12 months after she was left out of Team GB’s Olympic squad for the Tokyo Games.

“I can’t believe it, sometimes football puts you down but bouncing back is the best way and that is what we have done,” she said.

“I am speechless, I can’t take it all in, I am still in shock. I can’t believe we’ve won it, I just can’t, it’s mad. I am so, so proud of this team. I love this team and I love this country.” 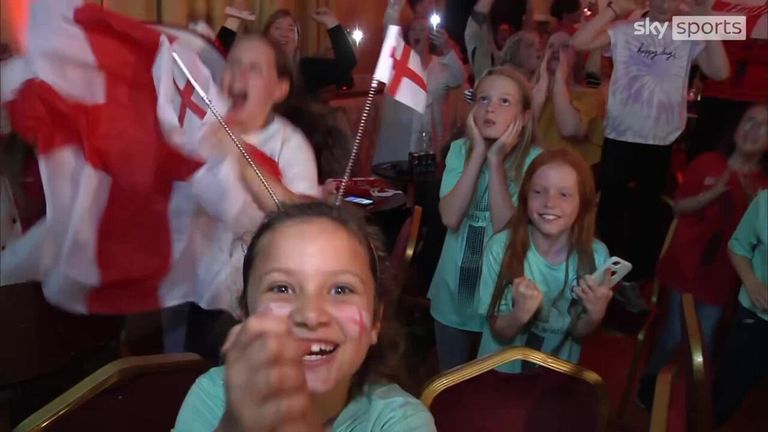 Tens of thousands of fans draped in the red and white flag of England erupted in joy at Wembley Stadium on Sunday – and at fan parks, homes and pubs across the country.

England’s progress through the tournament, just over a year after the men’s side lost the final at the same ground, has gripped the country, with members of the royal family, government, sports stars and singers all sending their support.

Their win, over a country that have previously defeated so many England football teams – men and women – marked the first major England victory at a soccer championship for 56 years, and earned a message of congratulations from the Queen.

“Your success goes far beyond the trophy you have so deservedly earned. You have all set an example that will be an inspiration for girls and women today, and for future generations,” the Queen wrote.

“It is my hope that you will be as proud of the impact you have had on your sport as you are of the result today.”

England’s 4-0 thrashing of Sweden in the semi-final drew a peak BBC TV audience of 9.3 million viewers, and that figure was expected to have been broken in the final.

Excitement around the England team has been mounting since some 69,000 supporters gathered at Old Trafford to watch their opening victory over Austria in early July.

By Sunday a Royal Air Force flypast with an all-female crew took to the skies over Wembley, while 87,192 fans gathered in the stadium – the highest total recorded in either the men’s or women’s editions of the tournament. Prince William, who had earlier released a short video of support with his seven-year-old daughter Princess Charlotte , handed out the medals before hugging many of the players.

“Huge congratulations to Sarina, Leah (Williamson) and the whole team,” Prime Minister Boris Johnson said. “Football pitches across the country will be filled as never before by girls and women inspired by your triumph.”

Videos online showed hundreds of fans following the game on big screens in city centres in London, Birmingham and Manchester, cheering as England forward Chloe Kelly scored in the 110th minute before running away in her sports bra.

“Could we ever envisage when we were girls growing up that one day we would have nearly 90,000 people at Wembley supporting the women’s football team?” one fan, Emily Taylor, told Reuters before the match. “Come on England”.