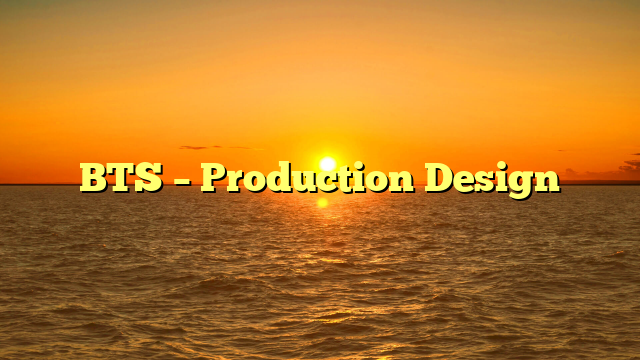 Have you ever looked at the list of job titles that scroll past during the credits of a movie? There are hundreds of them, even in smaller films. And if you’re watching a Marvel movie, waiting for the post-credits scene, then there could be thousands. While the roles of directors, writers and producers are pretty well known, many don’t get the recognition they deserve.

Over the next few months, we’re going to be looking at some of the other roles that are vital to movies being made. Today we’re going to look at the role of the Production Designer.

What Does A Production Designer Do?

A Production Designer creates the look of a movie or TV show. They take the script and work with the Director and producers to bring their vision to life. Just think about where movies can be set. You could be on an alien spaceship, a Regency ballroom or anywhere in between. Their work is vital to a movie being believable and drawing the viewer into the time and space it inhabits. It can be the difference in believing you’re watching something set in a particular period, rather than watching modern actors playing dress-up.

The Need To Become Experts, Quickly

It’s common for Production Designers to work on many types of movies throughout their career, so they need to immerse themselves in the time period or aesthetic they’re trying to achieve, and fast.

For example, the workplace. There’s a huge difference between the modern, spartan, almost futuristic design of Severence, the type with a soundproof telephone booth, gleaming surfaces and top-line technology. In contrast, the set of Mad Men had to embody the look and feel of the 1960s. Every element has to be right, from the decanters they use for their (many) drinks to the furniture and typewriters used.

Just look at the movies nominated for the 2021 Academy Awards in the Best Production Design category.

Who Does The Production Designer Work With?

No department works in isolation on a movie or TV show. Production Designers can work closely with the Director, Producer in the early stages, coming up with concepts and artwork for the look proposed look of the production. They then collaborate with other departments such as the director of photography, art designers, set designers, costume, special effects and lighting. They all work together to bring the universe of the story to life, all within the agreed budgets.

What Makes A Great Production Designer?

There are many skills a good Production Designer needs. Not only do they need to be creative, but they also need the skills to bring this creativity to the screen. They need the research skills to be able to immerse themselves in a particular period in history and present this on screen.

A deep understanding of how other departments work too. They need to consider how filming, lighting and costume will all work within the spaces they’re creating.

Finally, they also need to be able to take charge of the teams that work for them to physically or virtually create a world, so that the vision comes to the screen on time.

So the next time you watch a movie or a TV show, take a good look at what’s on the screen. Every single item has been meticulously researched and chosen for a particular reason. The amount of work that goes into Production Design is nothing short of spectacular from these behind-the-scenes heroes.

The post BTS – Production Design appeared first on The Book, The Film, The T-Shirt.