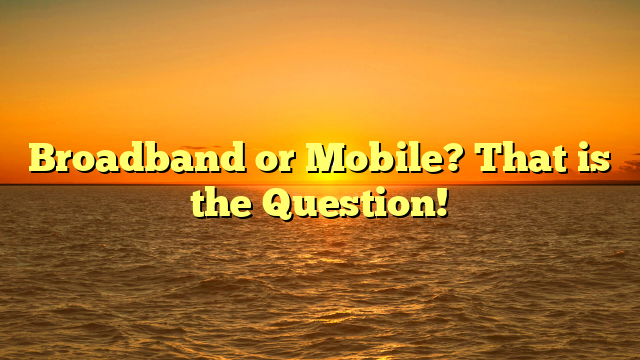 For some years on and off, I’ve been struggling with inadequate broadband, that is, dish-based broadband from a local company here in Southern Spain – a company who have recently merged with another, who are something of a monopoly in the area and who’s customer skills need a lot of work.

I’ve included various links below – in no case am I associated with any of those companies or products – the information is there to be helpful only.

A little background.. we recently made the move to Spain after being here only part time for many years and accepting the limits of dish-based (not satellite) broadband accordingly. There were/are no landline fibre alternatives in our exact location (and please don’t plug Starlink – that is a VERY expensive dish option right now).

Part of the initial attraction was the ability to lower the cost/speed for the times we were back in the UK, without penalty.

Then, last year, after promising fibre “soon”, the broadband company (Habland) dropped twin bombshells (after their merger). “We don’t offer a reduced rate service” (ignoring having done just that for many years) and “sorry we can’t fit fibre, you will have to fit poles first”. After a lifetime of running businesses and more, I’m retired and not inclined to kitting out our entire street with telephone poles. Their dish system provided enough download speed (at best 30Mbps) for reasonable quality TV watching but a pathetic 2-3Mbps upload – not very good for conferencing and quite useless for YouTube video creation.

In addition to above, in bad weather, the dish system would shut down for short periods, presumably for safety reasons though we’ve never been told why (and I’ve never noticed local mobile masts going offline).

So, I’ve been looking for broadband alternatives – there are (at least it seemed) very few viable alternatives around us – when put to the test, no-one else would take on the job of installing poles up our street (which is on a hill). There is of course Starlink but right now that’s a TAD expensive to fit and to use. Then I hit on the idea of using 4G/5G mobile tech. We get no 5G but a good 4G LTE signal at our home and an even better signal above roof level. At first it sounded great, then as I started to check, virtually all the mobile companies had monthly data limits too severe to use their mobile offerings as broadband alternatives.

In addition, inside my home the signals were not that good, so an external 4g antenna was needed or so it seemed. None none of my existing (internal) 4g-capable routers had external antenna facilities so I’d need an antenna and a waterproof router.

And then two things happened – I discovered a mobile operator offering lots of data – enough for a month’s worth of TV, my normal downloads and of course, being mobile, enough UPLOAD speed for YouTube video creation.

At the same time, I stumbled on an inexpensive external 4G router with POE, that is, a weatherproof 4G router with WiFi output AND Ethernet which also handles power requirements in the Ethernet cable (via POE – power over Ethernet).

Essentially I bought the KuWFi external router (pretty much a random decision based on Amazon availability – for no other reason than “if it doesn’t work, return it for free”) and which has 2 4G antennas. 2 WiFi antennas.. See the end – I do NOT currently recommend this router.

After much experimenting I found an ideal spot on the roof for the router, increasing the download speed to over 60Mb/s and maybe 20-30Mbps – at least 10* faster than the dish uploads.

With a new SIM on the way I was all set for a personal revolution – and then a shock followed by a revelation… I use a VPN (Wireguard) server for local access when I’m on the road (not to be confused with a VPN client typically for watching TV etc. i.e. Surfshark or ExpressVPN both of which give access to UK iPlayer etc.)

Then I received a PM from Mr Shark – friend and regular contributor in here, to say:

“Check with your provider… usually none of them give you a public IP you can use, they all do NAT so you’re behind a NAT network – you have a public IP, of course, but you can’t go IN from there”

Essentially, despite using the NOIP service to ensure the non-fixed IP address given by the mobile operator isn’t an obstacle for VPN access, it seemed that OpenVPN and Wireguard are STILL out of the running.

But then I remembered ZeroTier, a per-device VPN I’d used in the past (free for personal use). With this, my VPN operation was/is back in action. Zerotier is installed on all internal devices which need to be accessed remotely, as well as the mobile device doing the accessing – and they all become part of a secure private network.

Zerotier setup is trivial on PC and mobile devices – but THEN I read an article about using Zerotier on Synology NAS.

My thanks to first responder “Rogan” (minutes after I put the blog up) for pointing out TailScale similar to Zerotier but on initial testing possibly even easier to use – DEAD easy to set up on Android, PC and RPi. Even works on my NAS. Update: I’ve been using TailScale for several weeks and I love it.

The upshot? Both Tailscale and Zerotier rely on a cloud service for initial connection only, so best to have both for safety? I can access my home control and my NAS, remotely no problem – the 4G router seemed to work – I got reasonable speeds and all I needed was is the SIM from the mobile operator to go into the router (I did all my original testing with a SIM from my normal mobile operator – with very limited data).

So, firstly I contacted the new mobile company and after an initial hitch wherein they neglected to mention that their SIMS arrive deactivated and stays that way until you send some personal info to them (easy in English, not quite so easy when you are speaking two different languages), my connection was up and running. 300GB a month which after 2+ months experience looks like it will be enough. I have to say this particular Valencia area, Spanish-based company have been very helpful (they do speak English).

I then spent all afternoon mounting my new aluminium pole and finally the router – I then realised that instead of insulating the cable I could simply put it in the tube (which is very solidly affixed to the wall). As I got everything into final position I ended up getting a decent overall speed increase.

It is possible I could do better with careful positioning but this was doing better than my original fibre installation back in the UK..

So now at last it was possible to say that the rather ugly dish system (lower left of the image above) was going back to Habland.

Some figures for interested parties – as you can see below, I WAS on a fixed IP, labouring under the belief that this was necessary to run an internal VPN server – and as such was paying €6 + tax to Habland for that alone – in addition to the normal monthly charge for broadband. If nothing else I’ve been enlightened about that. Since the end of April 2022, I’ve been on the dynamic addressing used by the mobile provider. While being aware from the start that I’d no longer have a fixed IP address, I’m still not sure why the address changes apparently at random, even though the connection hasn’t been broken – but it’s not adversely affecting my new per-device VPNs mentioned above

Before changing the broadband over, speeds were typically 20-30Mbps down, 2.6-3Mbps up. Above are typical speeds on the 4G setup (or were until I spotted an issue with my new 4G router in summer heat – see further down) .

Using a Mobile HotSpot as Backup

This section is a bit specific. I’ve been using my new 4G company with no issues other than initially, during which I used FAR too much data… ie 40GB a day average over 2 days instead of the more typical 8GB average a day.

I could not get this to work as the WAN or main incoming connenction would always take priority. Now from here, this only applies to folk using openWRT-based routers. There is a text file called /etc/config/network which controls the priorities of the available WANS (option metric “10” or similar). So, if WAN is value 10 and WWAN is value 20, the lower priority wins in a contest – easy – except when it isn’t. SO, I swapped the metric value for WAN and WWAN and rebooted – no change. I changed them back and rebooted as I don’t like living dangerously. I then went off to GL-iNET’s forum and discovered that there may be another file who’s values are more important. /etc/config/mwan3

I went to the bottom of that file to discover:

Originally those metrics were ‘1’ and ‘2’ – I simply swapped them over and didn’t even have to reboot the router – that solved the problem. I now have a large-amount-of-data 4G service which does the job but if for any reason I do run out of data (unlikely), I can simply activate the hotspot on my phone and the phone hotspot will begin to supply the Internet to my network.

The Internet address coming from my phone hotspot, sitting in the office – the incoming address (in both cases) is dynamic before anyone says I’m giving too much info away…

and now – I turn off the hotspot, wait a moment, try again and – back to main broadband..

I can NOT recommend that KuWFI router as things stand – the Amazon return time ran out very quickly and since the hot weather struck in Spain (35-40c) I’ve found a serious issue with the router. We’ve seen the odd TV drop-out and I put that down to signal – until recently when the signal started failing consistently – the router talks to my network reliably but the 4G drops out – I checked and it appeared to be the heatwave – so I brought it indoors – that seemed to solve the issue but of course defeated the object – I’ve lost faith in the router now (at least for external use) and I started using a GL-iNET router I had handy (no external antenna, not intended for outdoor use) on the assumption it won’t rain in the next few weeks – perfect but not that good a 4G signal pickup. For now our HD TV was just fine – several episodes of sun-avoiding Jack Reacher episodes later – not a single issue.

Meanwhile, on a hunch based on web reviews) I ordered a TP-Link 4G router – Archer MR600 V2 – strangely – one of you readers recommended that this router at the same time – just as it was arriving in the mail. It is working fine – see the comments for more updates but the future looks bright (and to complete that phrase, yes, the future looks Orange

3 days in… I’m getting up to 100Mbps download and up to 50Mbps upload using the TP-Link mounted in a corner of my office.

I think this is one of those blog entries that will continue to grow and remain popular over time – your experiences are welcome in the comments below… meanwhile another company called MiFibra.Online came to my attention, promising fibre in our area (The Spanish government has received (or at least been granted) billions of Euros to kit out rural areas – butr it seems up to now that companies are being selective where they do installations)… if the company ever gets their records straight, there could be possibilities there – currently they have #25 opposite us as containing several chalets and the availability of fibre – both incorrect. That property has only dish broadband of the kind we just removed and houses one couple only. Hmmm…

The post Broadband or Mobile? That is the Question! appeared first on Scargill’s Tech Blog.