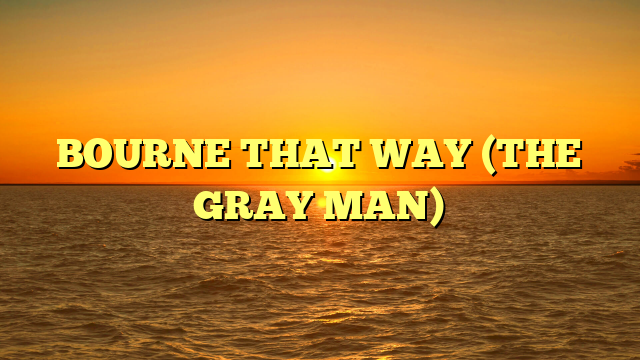 They’re the second most commercially successful directors of all time behind Steven Spielberg.

But Cleveland-born Joe and Anthony Russo will not be closing the $4 billion gap on their fellow Ohioan just yet.

That’s not because their latest crash, bang, wallop movie ‘The Gray Man’ has been a flop – far from it.

It’s just that it was made for Netflix. 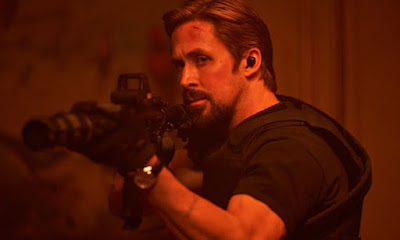 Therefore, it has had a rather limited theatrical release.

But what if it had received a traditional release?

Well, there’s good grounds to believe it might have been a huge smash hit.

Within days of its release on streaming, Netflix confirmed it was viewed 88.55 million times – equating to around 43.55 million viewers.

The Russos’ movie was also the most watched film in 84 countries.

The most expensive film Netfix has ever made, it is the fifth best performing movie in the streaming giant’s history.

So it is not surprising that Joe and Anthony Russo promptly announced a sequel after describing audience reaction to their thriller as “phenomenal”.

Based on a 2009 novel by Memphis born writer Mark Greaney, who collaborated with Tom Clancy on his final novels, it is a movie very much in the mould of the James Bond, Jason Bourne, Ethan Hunt and Jack Ryan franchises, with even a hint of Villanelle. 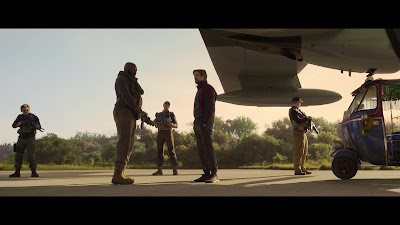 It’s full of glamorous locations, dazzling stuntwork and visual effects and it races along like a bullet train in Shanghai.

Ryan Gosling plays Six – a former prisoner jailed for murdering in 1995 his abusive father, played in flashback by Shea Whigham, in order to protect his younger brother.

Visited by Billy Bob Thornton’s senior CIA operative Donald Fitzroy eight years later, the unnamed prisoner is offered a piece of bubblegum and one hell of a deal. 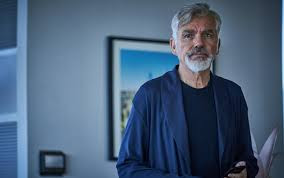 If he agrees to become an assassin on the CIA’s Sierra program, he will be freed from prison – an offer he immediately grasps.

Fast forward 18 years and we see Six in the middle of an elaborate assassination mission in Bangkok, under the direction in Langley of Rege Jean Page’s up and coming CIA official Denny Charmichael and Jessica Henwick’s Suzanne Brewer.

Before he launches the attack, Six links up with Ana de Armas’ CIA agent Dani Miranda.

But when the target, played by Callan Mulvey, comes into view in a Bangkok nightclub, to the consternation of Charmichael, Six refuses to pull the trigger because there are civilians nearby. 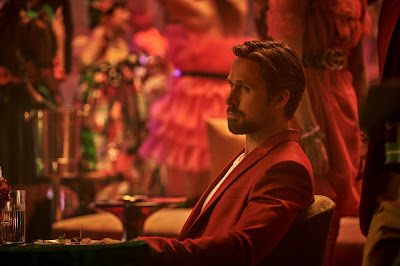 Instead he waits for the target to move and pursues him on foot, dispatching his bodyguards before a fight breaks out on the dancefloor.

The target jumps from the building, with Six following suit and they scrap in an alley until the target is mortally wounded.

Revealing himself to be Four, a fellow Sierra assassin, he gives Six a necklace containing a drive which he claims will expose Charmichael’s corruption.

Contacted by Charmichael, the rising CiA star is anxious to find out from Six if the drive has been recovered but is evasive about its contents when pressed by him.

Six decides to go to ground, contacting his old mentor Fitzroy who now lives in Baku with his teenage niece, Julia Butters’ Claire who has a heart condition and who Six once guarded.

Hansen immediately moves to kidnap Fitzroy and Claire to use as leverage, holding them in Croatia and forcing Six’s mentor to order his assassination on the aircraft carrier

Naturally his plan fails, with Six heading to Vienna and Charmichael ordering Brewer to supervise Hansen until their target is eliminated.

However Hansen just ignores her commands. 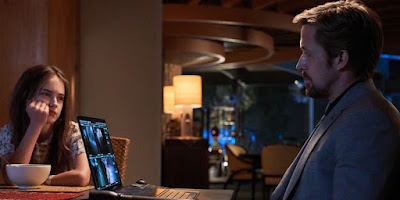 With Hansen hiring a squad of top assassins, including Dhanush’s Tamil fighter Lone Wolf, and putting a bounty on Six’s head, he is betrayed by Wagner Moura’s old contact Laszlo Soza in Vienna.

However once again, Hansen lets him slip through his fingers – thanks to the intervention of Dani Miranda.

Dani has been pulled from a mission by Charmichael and is keen to find out why everyone is being so shifty about what went down in Bangkok.

She and Six head to Prague because he mailed the drive from Thailand to another old contact, Alfre Woodard’s retired Sierra program handler, Margaret Cahill. 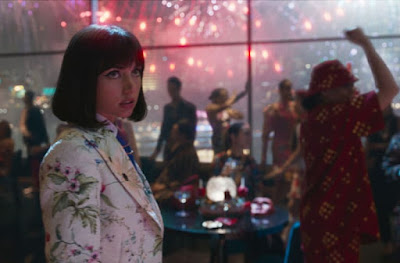 But as they view the contents of the drive at her home, Hansen once again tracks them down and is determined to eliminate Six and anyone who stands in his way.

Or will Six expose Charmichael’s corruption?

And will Six be able to rescue Fitzroy and Claire?

Adapted for the screen by Joe Russo and his ‘Marvel Avengers‘ collaborators Christopher Markus and Stephen McFeely, ‘The Gray Man’ is striking for its lack of originality.

It’s basically a cocktail of sequences you have seen in countless other spy and assassin movies from 007 to Bourne to ‘Mission Impossible’ with even some things from recent superhero tales thrown in for good measure.

So, if you like spy and assassin adventures that hop between glamorous locations like Bangkok, Vienna, Prague and Croatia while announcing them with full screen captions a la ‘Killing Eve’, there you go.

If you love fist and knife fights on public transport like ‘Shangi Chi and the Legend of the Ten Rings‘, knock yourself out. 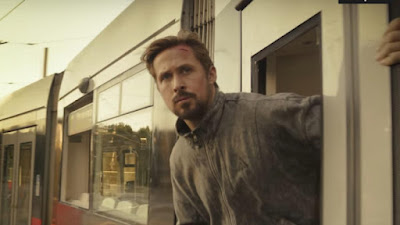 What about daring stunts on aircraft carriers like ‘Mission Impossible’? Yup.

How about Ana de Armas kicking butt just like she did in ‘No Time To Die’? It’s there.

There’s even a carbon copy of the fingernail torture scene in Stephen Gaghan’s 2005 geopolitical thriller ‘Syriana’.

And yet, for all its lack of originality, ‘The Gray Man’ somehow works. 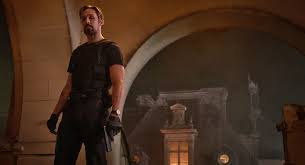 A lot of that is down to the Russos’ flair for spectacular destruction and general mayhem.

But it is mostly down to Gosling’s charisma and his ability to keep you invested while almost everyone around him is hamming it up.

With the exceptions of de Armas, Thornton and Woodard, the rest of the cast takes a panto approach to their roles.

Thornton could never do panto, so delivers each line with his trademark world weariness. 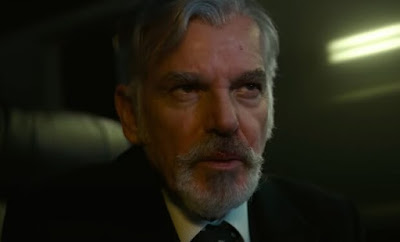 de Armas goes about her business efficiently but with a real sparkle like she did in ‘No Time To Die’ – driving fast cars, punching people and firing big guns.

Woodard imbues Cahill with a sense of dignity.

By way of contrast, Evans cranks everything up to eleven.

He is so hammy you expect him to be served up at the end of the movie with a salad. 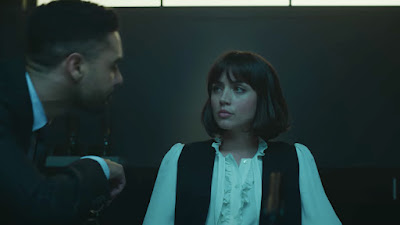 Gosling brings a cool detachment to the role of Six.

He’s hardly stretching himself but he clearly is having a lot of fun.

And why should he stretch himself in a role that feels more like the early Bond and ‘Mission Impossible’ films?

If there is a weak performance, it is Rege Jean Paige’s as Charmichael whose role feels a bit too peripheral to be a master manipulator and who comes across like an office administrator who has lucked out by getting more gadgets. 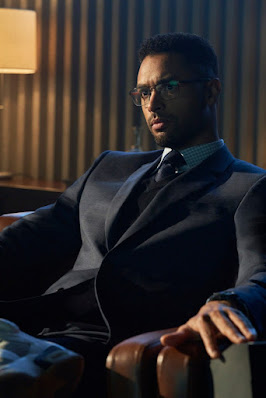 There are hints that the Russos, Markus and McFeely may be building towards something that could a bit deeper.

However past experience suggests it won’t be too deep.

So you never get the sense that ‘The Gray Man’ will stray into the darker territory of Treadstone program in Paul Greengrass’s Bourne films or Daniel Craig’s damaged James Bond.

‘The Gray Man’ is just a throwaway action movie. 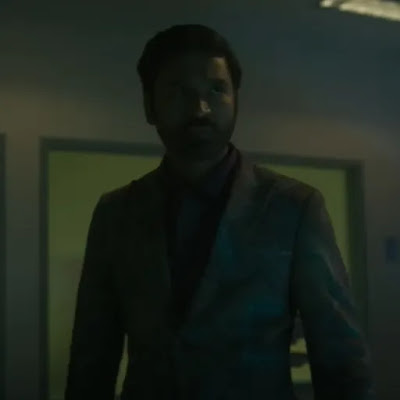 It’s a piece of brash fun that passes two hours but it’s no more than that.

It is instantly forgettable.

The challenge for the Russos next time around is to see if they are really capable of coming up with a sequel that has a bit more weight.

The sequel needs to be more than just a mish mash of every spy movie we have seen before if it is really to challenge better spy action franchises.

(‘The Gray Man’ received a limited theatrical release in the UK on July 15, 2022 before being made available for streaming on Netflix on July 22, 2022)