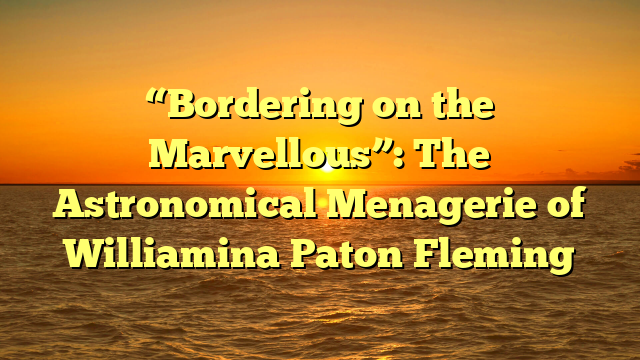 When William Huggins became the first human to examine the spectrum of a star in 1864, he could little have imagined the magnitude of the project he had brought to life.  With the analysis of stellar spectra, astronomy took a bold leap forward from comet hunting and position plotting to a thoroughgoing chemical analysis of the stars which had the potential of unveiling wholly new models of the cosmos.  In the United States, the Harvard Observatory under Edward Pickering (1877-1919) undertook in 1886 a massive project to photograph and categorize the spectral contents of the night sky, an investigation that would generate first hundreds, then hundreds of thousands, of photographic plates.  Generating those plates was a simple enough matter, but the real question was, who was going to analyze them?

Put another way, after the official astronomers finished amassing their photographical observations at night, who was going to put in the hours of work during the subsequent day, poring over those plates, recording the significant features of their spectra, comparing them to previous measurements, and categorizing the underlying objects based on variability, composition, color, and age?  Pickering could have hired more men for the task, but men were expensive.  The answer, it seemed, was women, who could be hired for a quarter a day, and some of whom would even work for free just to gain expertise in working with real, current astronomical data.

In addition to the issue of who was going to perform all the analytical work, was the question of who was going to organize and oversee it all.  Who could be trusted to take this, for the time, mind-boggling amount of raw data and create administrative structures and procedures to make sure that standardized and reliable categorizations would be attained, regardless of which woman happened to be analyzing a particular plate?  As luck would have it, Pickering had the perfect person for that job directly at hand.  Williamina Paton Fleming (1857-1911) had served as Pickering’s housekeeper after a spell of bad personal luck, but her intelligence and organization had been noted by Pickering’s wife, who recommended that she be employed as an office assistant rather than as a household drudge.

It was a fateful decision – Fleming was an administrative and observational virtuoso with a profound memory, capable of discerning fine gradations of variation which she collected in her head, organizing the observed phenomena into the groupings that would become the categorizations she trained her team to recognize and record.  She was, in many ways, the Linnaeus of astronomy, employing her experience and sharp recall to tame the spectral chaos being generated by the Harvard Observatory, and her skills at differentiation to note and document entirely new astronomical phenomena.

For the first twenty-two years of her life, however, there was little to suggest the powerful scientific figure she would become.  She was born Williamina Paton Stevens in 1857 in Dundee, Scotland, to a family that descended from the Claverhouse Grahams, who traced their lineage back to the 14th century king Robert III, and included among their ancestors the first Viscount Dundee, John Graham of Claverhouse, who was a hero of the 17th century Jacobite Uprising.  Though rich in ancestors, Williamina’s childhood was hardly one of lordly ease.  Her father was a craftsman who died when she was seven years old, leaving her, her mother, and eight other siblings to get by as best they could.  She aided the family purse with her brain, becoming a student teacher at the age of 14, and at 20 she married James Orr Fleming, a bank employee some 16 years her senior.

The next steps in Williamina’s story are hazy, but what is sure is that at some point, either before or after Williamina emigrated to Boston, Massachusetts, James abandoned her and her as-yet-unborn son, to shift for themselves.  Some of Fleming’s siblings lived in Boston, so she was not entirely without support, but she would need some regular employment with a new child on the way, and in 1879 she found the position as maid to Edward Pickering which would place her life on an entirely new trajectory.

Later that year, Fleming was moved to office work at the observatory as an occupation both more in line with her talents, and better suited in nineteenth century estimations to a woman in the more advanced stages of pregnancy.  The Pickerings even went so far as to help pay for Fleming to return to Scotland for her laying-in and childbirth.  In recognition of all the Pickerings had done for her during her time of greatest need, Fleming named her child Edward Charles Pickering Fleming.

She returned to the United States and her work at the observatory, leaving young Edward behind in the care of her mother.  Upon her return in 1881, Pickering formally promoted Fleming from office worker to a full-time member of the observatory staff, with particular responsibilities for recording and systematizing relative star brightness.  In the course of this work, she noted over 300 “variable stars” which changed their brightness over time, and one type of which, the Cepheid variable star, would prove central to Henrietta Leavitt-Swan’s revolutionary work of 1908 (to put this achievement in perspective, when Fleming began her work, fewer than two hundred variable stars were known to astronomers).  She later gathered 222 of these and provided reference data for their future tracking, an effort that was summarized by the author of her Royal Astronomical Society obituary as follows: “Many astronomers are deservedly proud to have discovered one variable, and content to leave the arrangements for its observation to others: the discovery of 222, and the care for their future on this scale, is an achievement bordering on the marvellous.”

As marvelous as her achievements were, they were about to increase another order of magnitude still, as in 1886 the widow of spectral astronomer Henry Draper approached Edward Pickering with an idea to fund the spectral study of the night sky, a project known today as the Henry Draper Catalogue.  The work of coming up with a more refined categorization than the four Secchi classes that had been used theretofore, and then applying that system to the observatory’s spectral data, largely fell to Fleming, who created a new system with twelve main and four auxiliary categories, labeled A-Q.  The first edition of the Catalogue, published in 1890, contained 10,351 stars categorized primarily by Fleming from 28,266 spectra spread across 633 photographic plates.

It was a dizzying achievement for a pre-digital age astronomer, and it was not nearly at an end.  In 1897 Fleming and Antonia Maury would publish an updated and expanded edition of the Catalogue, and in 1890 a second observatory was opened by Harvard in Peru to photograph the Southern Hemisphere sky, which work was done by Annie Jump Cannon using a reduced and rearranged form of Fleming’s categorization system, the OBAFGKM system still employed today.  The final volume of the Henry Draper Catalogue was published in 1924, by which time over 225,000 stellar spectra had been recorded and categorized by Fleming’s team and its descendents.

But Fleming’s achievements are not only about quantity and brute force perseverance, but about sharp scientific intuition as well, whereby experience and insight combined to notice unusual phenomena, and focused research thereupon.  Many one sentence biographies of Fleming focus on her as the discoverer of the Horsehead Nebula, which she had noticed on a photographic plate in 1888, and the credit for which was initially given to Pickering, a mistake corrected in the 1908 edition of the Draper Catalogue.

The Horsehead Nebula was one of 59 nebulae discovered by Fleming, which is thoroughly rad, but what I want to talk about even more is her discovery of white dwarf stars in 1910.  Henry Norris Russell had asked Pickering to determine the category of a collection of faint stars he had been observing.  Pickering agreed, and Fleming categorized most of the stars as class M, which consist of yellowish-red stars that make up 76% of all stars in the universe and have the lowest temperature of any stars in the OBAFGKM system.  (Our own sun is a class G star, in case you were wondering.)  One of the faint stars, however, 40 Eridani B, Fleming categorized as class A.  Such stars have 3-4 times the temperature of M stars, and tend to burn white.

The result was a bombshell in Russell’s ordered conception of the cosmos.  Luminosity, which affects how bright an object appears to our instruments, is determined primarily by two factors – the object’s radius, and its temperature.  As a hot class A object, 40 Eridani B should have been relatively bright – its lack of luminosity, then, could only be explained by it having some manner of freakishly small radius, a new type of inhabitant in the cosmos, eventually dubbed a “white dwarf” in 1922.  White dwarfs occur when stars collapse that do not have enough mass to form a black hole.  The result is an ultra-dense object the size of the Earth, but with the mass of a sun, in which fusion no longer happens, but which can still have high surface temperatures when it first forms.  In later accounts of the discovery, Russell recognized Fleming as, “the first person who knew of the existence of white dwarfs.”

Having discovered over 300 variable stars, 59 nebulae, 10 novae (including the first ever nova discovered through spectral techniques, and which spawned powerful new tools for revealing future novae), the Horsehead Nebula, and the first white dwarf star, Fleming was a vastly respected individual in the astronomical community, which honored her as much as its baked-in institutional inertia would allow.  Pickering promoted her in 1899 to the position of “Curator of Astronomical Photographs,” a job created particularly for her to officially recognize the magnitude of her contributions, and the first titled position ever offered a woman at Harvard.  In 1906, the Royal Astronomical Society made her an honorary member, the first Scottish woman to attain that distinction (the first women made honorary members were Caroline Herschel and Mary Somerville, both in 1835), and she was also a charter member of the Astronomical and Astrophysical Society of America, and a member of the Societe Astronomique de France.

She worked steadily at her job, earning 60 percent what a man in her position would have earned, supporting herself and her spendthrift son Edward while contributing foundationally to one of the early 20th Century’s most monumental astronomical undertakings and pushing through the surgical procedures that pervaded her last two years, until she was hospitalized for pneumonia in the spring of 1911, ultimately passing away on May 21, 1911.  The system she set into motion, however, remained in place after her death, resulting not only in the towering achievement of the Henry Draper Catalogue, but in providing the space that launched the careers of some of the century’s most estimable astronomical figures, including Annie Jump Cannon, Henrietta Swan Leavitt, Antonia Maury, and Cecilia Payne-Gaposchkin.

FURTHER READING: Like many of the figures in this volume, Williamina Fleming has yet to receive a standalone volume devoted to her life and works, but she does appear often in works about the early Harvard Observatory, its computers, and key figures.  Dava Sobel’s The Glass Universe (2016) is devoted entirely to Pickering and the history of the women computers at the Harvard Observatory, and is a great place to start.  You can also find her Royal Astronomical Society obituary in the 4th issue of the 72nd edition of the Monthly Notices (Feb 1912).  And, if you want to do something really cool, you can check out the online Henry Draper Catalogue which has links to the thousands of stars recorded by Fleming, Maury, and Cannon, with pictures and locations for each!

Want to know more awesome Women in Science? Check out my WYSK column archive and my books: A History of Women in Medicine and Medical Research – Exploring the Trailblazers of STEM (December 2022, pre-order), and Illustrated Women in Science – Volume 1, Volume 2 and Volume 3.

The post “Bordering on the Marvellous”: The Astronomical Menagerie of Williamina Paton Fleming appeared first on Women You Should Know®.