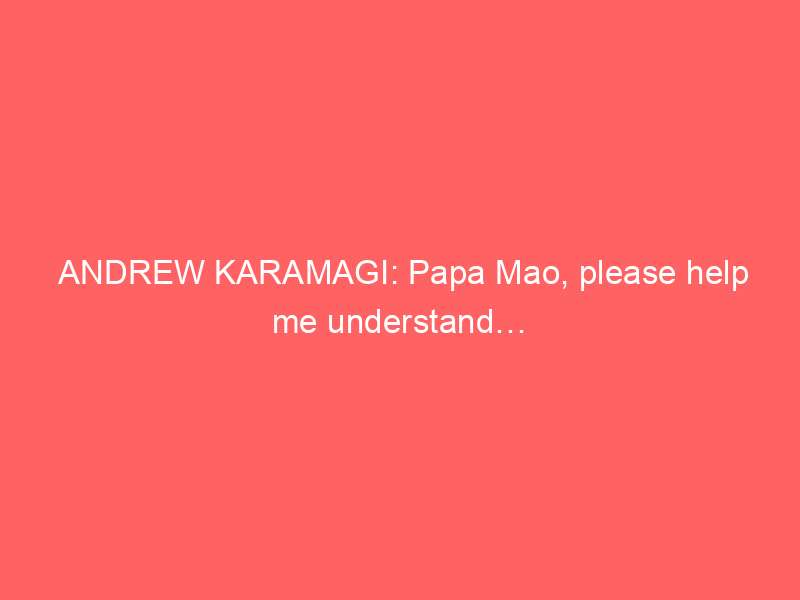 I was just under two years old when you and Noble Mayombo faced off in what I think was the last issues-based contest for the presidency of the student guild at Makerere University.

In 1996, when you became Member of Parliament for Gulu Municipality, I was in Primary 3, still learning multiplication, division, subtraction, and addition. In 2006, when you were elected chairman of Gulu District, I was in Secondary 5.

Your newspaper column, together with Andrew Mwenda’s, Austin Ejiet’s, Abdul Rahman Raheem’s and other erstwhile leading lights, were a weekly staple. In fact, I often used some of my pocket money to buy newspapers to read your thoughts. When I had extra coins, I’d go to an internet café and send an email thanking you for your penmanship.

For me who was born to a staunch NRM family, and raised in significant privilege, with close proximity to NRM royalty, you were a fascinating figure whose position about national issues was central to the development and cementing of my firm stance on social justice, fairness, and equity…and by extension, my solid opposition to General Yoweri Museveni’s misrule. Without knowing or perhaps intending it, you are significantly responsible for my (and I believe innumerable others’) political worldview.

I remember using some of your quotes for two of my successful campaigns for student leadership in secondary school. Who can forget your searing indictment of Museveni as the kingpin of corruption by the statement, “the fish begins rotting from the head!”?

Notably, together with other luminaries like Olara Otunnu, you compellingly built and presented the case for the NRA-led genocide against the Acholi. Your argument ably illustrated how, far from being saved from Joseph Kony’s Lord’s Resistance Army (LRA), your kin were deliberately annihilated in Internally Displaced People’s (IDP) camps through mass starvation, mass rape, subjection to subhuman living conditions, and outright neglect.

One of the permanent effects of the war in Northern Uganda is that there is a missing generation of especially men above fifty years of age, resulting from the atrocities of the NRA. For millions of Ugandans and the world, you shone a bright spotlight on a forgotten armed conflict that seemed so distant, in a place that seemed to be somewhere in Siberia, not Uganda.

Throughout your other assignments as a legislator, Democratic Party president, and presidential aspirant, your leadership was proof that the presidency wasn’t the exclusive domain of the incumbent despot or erstwhile guerrillas. Your very presence on the scene pushed back against the notion that Uganda can only be led by soldiers, as our post-independent history seems to suggest.

With the above background in mind, imagine my excitement when, at a young leaders’ retreat, I met you in 2014 for the first time and spent hours talking to you! That day, you gave me and my peers a masterclass on Abraham Lincoln’s Gettysburg Address. We spoke late into the night. Your trademark humour was irrepressible and I remember laughing so hard when you narrated an incident where market women poured dry beans on tarmac, causing several police trucks that were pursuing you to skid off the road. The next day, I printed, laminated, and still keep a copy of Lincoln’s speech in my living room.

To matters last week, I have heard you justify your change of heart by arguing that after all, many members of the political opposition canoodle with Museveni behind closed doors, and preach water by day. Even when this is true, it does not exonerate a person of your stature. You cannot compare your pedigree to the cheap turncoats who hang around Kampala to rationalize your behaviour. You do not have that luxury. Even if the Pope suddenly lost his faith in God, it would be irresponsible of him to make that announcement and justify it to the one billion Catholics who follow that religion.

If anything, the outcomes of Ssemogerere’s, Mutagamba’s and others’ joining of Museveni should be lesson enough to steer clear of any such actions.

Some have defended your actions saying you are in the late afternoon of your life and so it is necessary to feather your nest and line your pocket to avoid an ignominious retirement. I want to believe that you are above this. At your level, opportunities for gainful, decent, and dignified employment exist anywhere in the world. In any case, given the mid-level and senior-level jobs you once held in the private sector, you certainly own some capital assets, stocks, or deposits that can guarantee you a dignified lifestyle, Mr. President.

Finally, I wonder whether the circumstances surrounding the untimely demise of your brother who was a dyed-in-the-wool UPC member, Jacob Oulanyah, aren’t sufficient warning about how handshakes with the Devil always end up going beyond the elbow.

The frustrations in this article are my own as an individual, but I am sure I speak for millions of (especially young) Ugandans and East Africans for whom you were a formative figure and indeed, role model. At a time when exemplars are scarce, and all we have is armed bandits, wheeler dealers, rent seekers, and looters in charge of public affairs—from the president down to local governments—the lighthouse that you have been in the raging sea that is Uganda should not have been extinguished.

In the darkness you have caused, our boats are marooned at sea, and need light to guide us ashore.

Please help me, help us your children, your protégés, to understand your turn around.