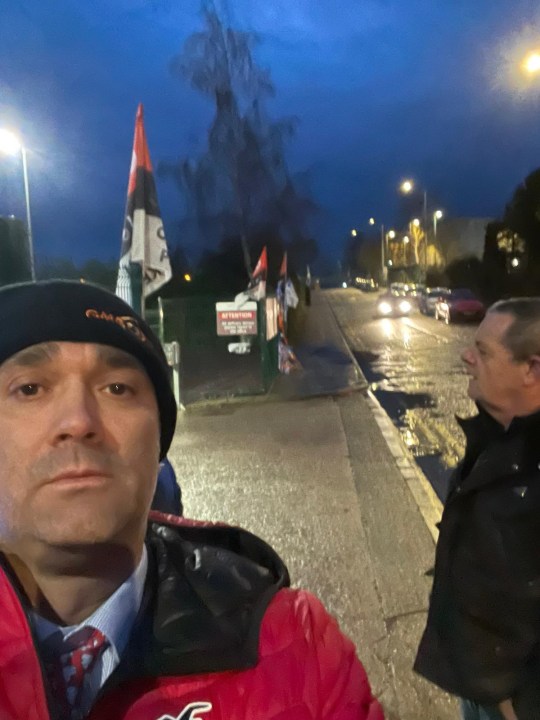 Ambulance staff left some picket lines empty during their first strike in 32 years – applauded by colleagues as they dashed to 999 emergencies.

More than 10,000 walked out across England and Wales in a day of action over pay and conditions by GMB, Unison and Unite members.

The unions had agreed with NHS trust bosses that staff would still respond  to emergencies classed as Category 1 – for life-threatening conditions such as cardiac arrest – and some Category 2 alerts. It meant workers were almost as busy as usual in some areas. Other trusts reported a fall in 999 calls as people used cars and taxis to transport friends and relatives to hospitals.

At one Welsh ambulance service depot, all striking members had to be called away to attend emergencies.

Nathan Holman tweeted video of himself and one other picket at Pentwyn, Cardiff, before 8am. ‘Unfortunately, the members have had to go because, as you can see behind me, there’s only one vehicle left,’ he said. ‘They’ve all jumped on a vehicle and responded to emergency calls.’

Unite leader Sharon Graham said: ‘When they’re coming out on blue lights we’re clapping them because we know where they want to be is treating patients. If there is a Category 1 incident, we’re proud they’re going out to treat patients who need critical help.’

However, strikers argued patients are dying on non-strike days as the NHS is so over-stretched, with shortages of at least 130,000 staff nationwide.

The West Midlands ambulance service told Metro 44 patients died this year so far while waiting for treatment or a procedure – the ‘vast majority’ due to long hospital handover delays.

In Bristol, Helen Field, a paramedic for 14 years, told Sky News: ‘In terms of the risk today, I actually don’t think it’s greater than any other day. We’re still covering our highest priority of calls.’

Colleague Ben Clark added: ‘Nobody wants to strike. But we have to make a stand. The NHS is on its knees. People are dying every day. We’re missing strokes and heart attacks every day.’

The independent NHS Pay Review Body has offered workers an average rise of 4.75 per cent. Ambulance unions have not made a specific demand but say the figure is too low for staff to cope with the cost of living. The next ambulance strike is on Wednesday and unions say they may escalate action  in January. More than 100,000 nurses walked out on Tuesday in a pay dispute.

The government is refusing to negotiate. Mr Barclay told Sky News: ‘We’re investing in the NHS, we’re investing in social care and I don’t want to divert money from those essential services focused on patients.’

This is the moment six paramedics broke their strike to rush to the aid of a motorcyclist who fell off his bike in front of them. The rider was showing his support for the NHS workers by honking his horn when he lost control and tumbled over. Another supporter, Laurence Herdman, who had been chatting with the crews outside their station in Weymouth, Dorset, said: ‘He was all right, and after they checked him over he drove off.’